Although our May trip was originally planned for a duration of three weeks, my bout with bronchitis delayed our May 12 departure by three days, then changes in the schedules of Daughter and No. 2 Son required us to return home a few days ahead of our proposed date of June 1. We had to alter our original, loosely planned itinerary a bit. This allowed us to make it to the two things in which arrival time was important--Bat Flight at Carlsbad Caverns and our Grand Canyon helicopter and jeep tour--but we were still able maintain a leisurely and rather open schedule as much as possible. We played it by ear and made a few unplanned and really interesting stops that weren't on our original list. Here is one of them. 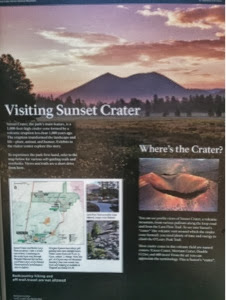 There are cinder cones and volcanic remnants all over the area we were exploring around Flagstaff. It was amazing. That area must have been a regular volcano farm--or  I could say a hotbed of volcanic activity (sorry...couldn't help it). There are about 600 volcanoes in the area. Go here for a map of the area showing all the volcanoes in the region. Sunset Crater is the result of an initial eruption sometime around AD 1180, although tree ring dating from house timbers yield earlier dates of about 1040 to 1060, but these are disputed because of lack of information concerning the source of origin of the timbers. The people of the puebloan culture who lived in the area undoubtedly witnessed the eruption of this volcano and the ash from  its activity probably enriched the soil of these early Southwestern farmers. These small volcanoes are silent now, but could erupt again at any time. 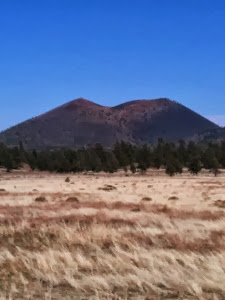 Sunset Crater Volcano from the road leading to the visitor center. Its total elevation is about 8,000 ft, with the cinder cone rising about 1,100 ft from the local elevation of almost 7,000 ft. My home elevation is just over 622 ft and the elevation of Monte Sano Mountain, Huntsville's landmark "mountain," is a little over 1600 ft, so even in the lowlands out here we were as high as the highest elevations in the Smoky Mountains of the Appalachians (Clingman's Dome at around 6640 ft). 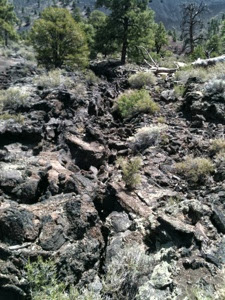 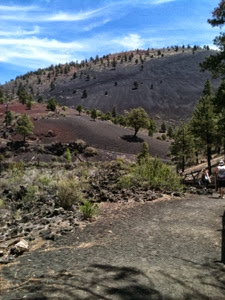 A view from the lava trail we hiked around the crater. I supposed you'd call this the back side. There is a trail that goes up to the summit, but it had to be closed in 1976 because of the risk of increased erosion. 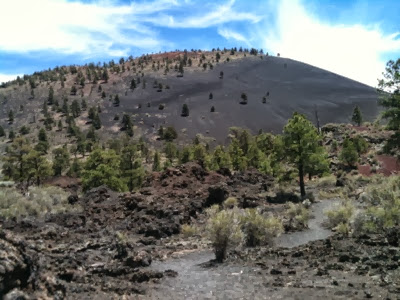 There were many beautiful old snags that provide homes for lots of critters--look, there's one now! 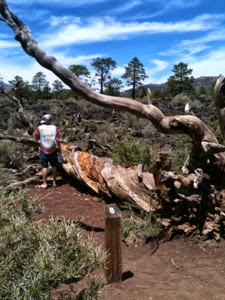 No. 2 Son and a fallen snag 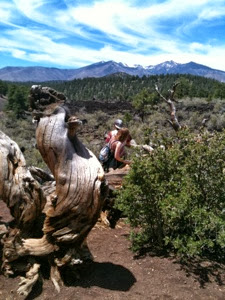 No. 2 and Daughter beside another fallen snag;  the San Francisco Peaks and Humphreys Peak (elevation 12,635 ft)  in the distance 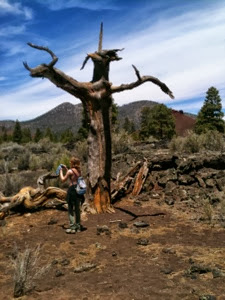 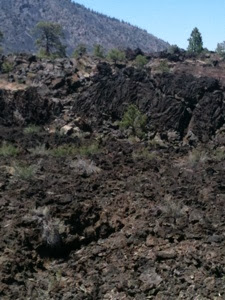 We spent four nights in Flagstaff, Arizona, which became our base camp for exploring the area.  There are many interesting things to see in and around Flagstaff.  I think we could have spent at least a week there.

I had planned to include Wupatki Ruins in this post, but will save that for next time.
Posted by bunnits at 11:18 PM