I've been off the grid lately, mostly due to lack of time and opportunity. I've been using my cell phone to check email and Facebook. Haven't been able to keep up with all my blog buddies, so I have lots of catching up to do and not sure how far I'll get with that any time soon.

I helped with a weaving workshop for the Cullman Fiber Guild, teaching new weavers how to dress/warp a loom. We had several table looms of various sizes and a couple of portable floor looms available. Lots of fun and got my 8-harness table loom up and running. For the workshop, we did 5-inch wide samples using 2-yard warps so it wouldn't take so long to measure the warp and dress the looms. It was neat to see the smiles on the faces of the attendees when they got the looms all ready to go and wove their samples.

Tuesday of this week I drove up to Knoxville with my daughter and friends to attend a lecture by Noam Chomsky, a professor at MIT, linguist, philosopher, and anarchist. I'd used several of his linguistic works in both undergraduate and graduate papers on language origins and cognitive development. He was to speak about his career. There was a huge response to this event. It was free and required no reservations. The auditiorium only held 900 people. Priority was given to UT students (not sure how many they let in), although there was some seating for the general public. We arrived about an hour before the lecture which was held at what used to be the old Alumni Gym when I was a student there. The line was out the door, down the street, and around the building to the front of Neyland Stadium. Shortly after we got in line, people began walking away from the building with the news that the auditorium was full and they were turning people away. Unfortunately, we and several hundred others didn't get in. Some folks who were turned away had been in line for two hours or more and had come from Nashville (about as far away as Huntsville) and elsewhere. Some people had arrived at 4:00 p.m. to get seats for the 7:00 p.m. event. Reluctant to give up, we waited in the misty rain along with other die-hards until the talk was about to start and checked one more time, but the auditorium was at capacity. No way they'd let anyone else in because of fire marshall's regulations. Disappointed, we went to find food and joked about how we should have staged a sit-in to protest not having been able to get in. As we walked toward the university center, we saw that the line was still just as long as it had been when we arrived and more folks were still lining up. A pity the organizing committee did not anticipate such a response and schedule it for one of the larger auditoriums on campus or require reservations. Our spirits were lifted somewhat when we ate at a delightful Indian restaurant, Taj, on Cumberland Avenue. The food was delicious and it was a relief to get out of the drizzle for a while. After dinner we went back to the auditiorum to see if there was a book signing. What luck! We got to meet him and get our books signed. It wasn't a total loss.

Bored yet? These were made on Monday morning between 7:00 and 10:00. Light snow and sleet was still falling. 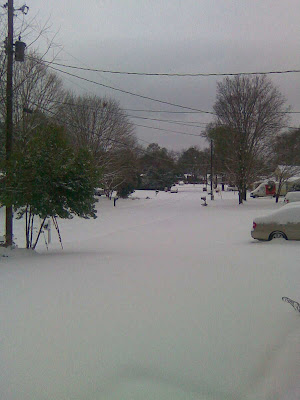 view from the front porch in daylight 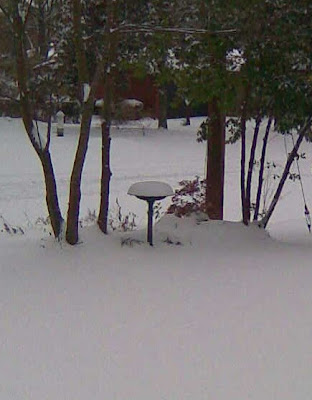 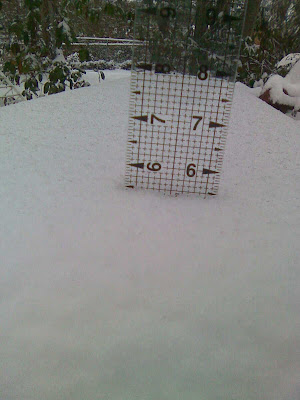 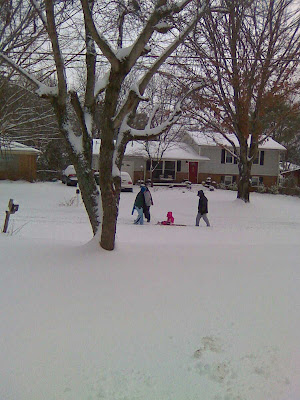 sledders heading for the top of the hill 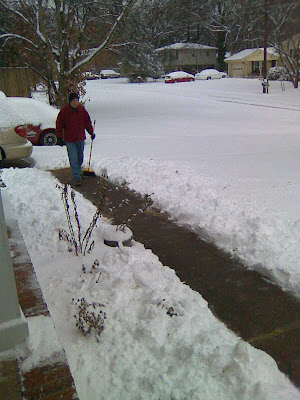 finished shoveling for a while 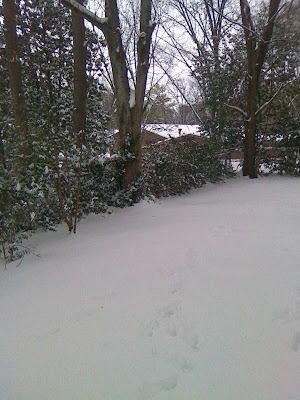 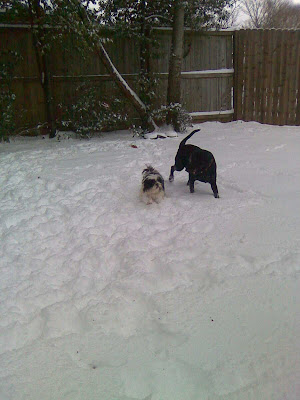 silly dogs playing in the snow 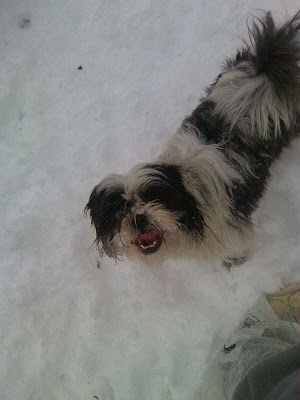 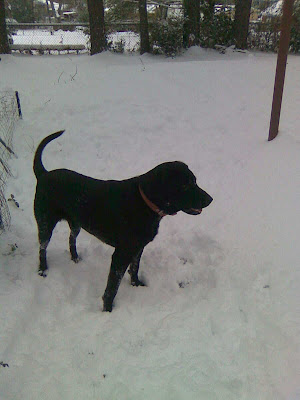 the other silly dog (Dixie) 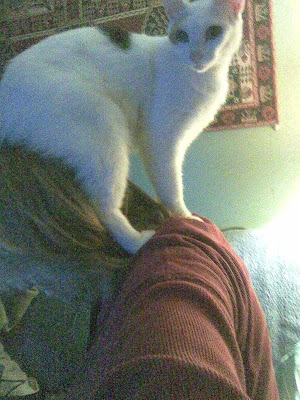 While trying to post the snow update, along came Twinkie who jumped onto my shoulder and sat down on my head. I think she was trying to tell me something.
Posted by bunnits at 1:00 AM 10 comments:

Two hours later. These photos are pretty much like the last, just more snow. 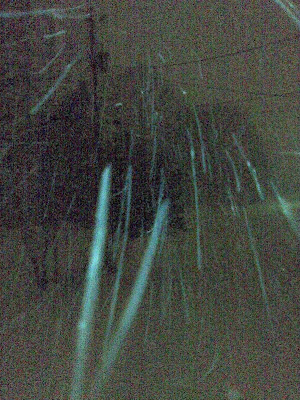 another shot down the street; streaks are snowflakes captured by the flash 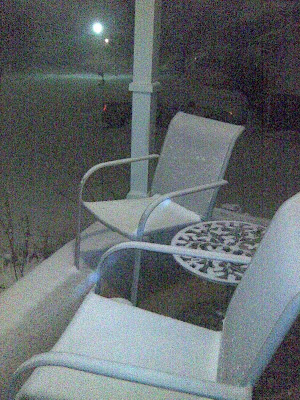 the porch chairs are getting snow cushions 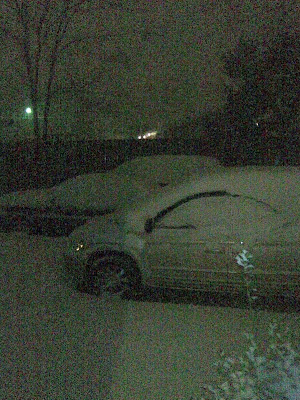 accumulation on the cars; wondering how they will look by morning 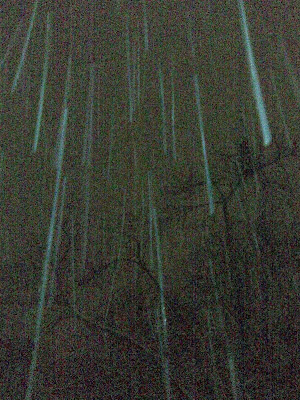 just can't resist shooting up into the falling flakes
Posted by bunnits at 11:01 PM 1 comment: 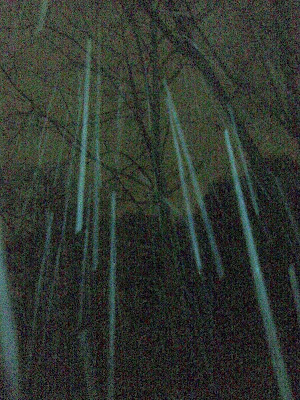 looking up into the snow 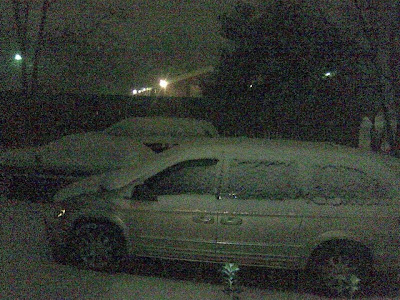 accumulation on our cars after about an hour 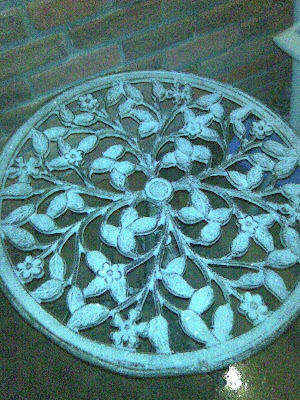 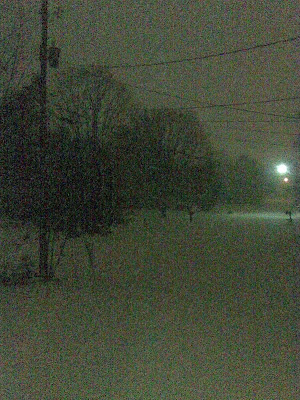 looking down the street from the front porch
Posted by bunnits at 9:00 PM 1 comment: 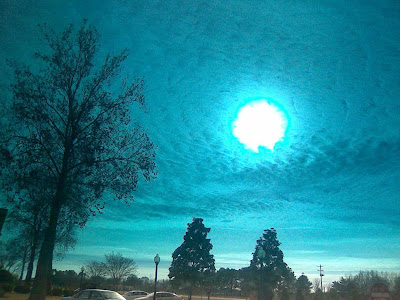