Yogi says  "What's a bun gotta do around here to get some fresh grub and a treat or two? And how 'bout some housekeeping while you're at it? " 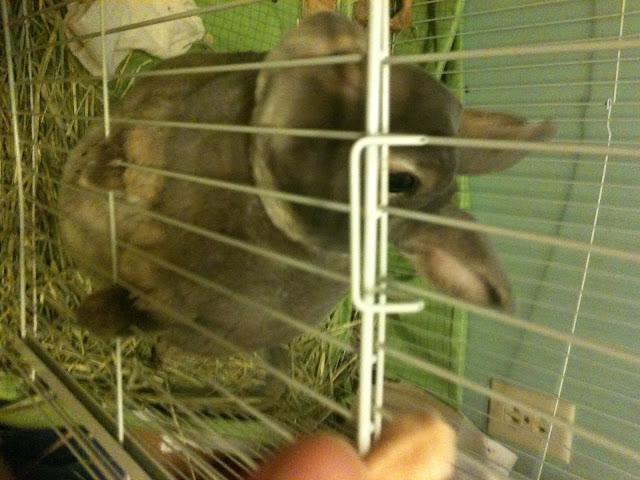 (the electrical outlet on the wall is not as close to his enclosure as it appears in the photo; with the angle of the shot, it looks like his pen is about a foot wide, but it's actually about 5' x 2')

Yogi is doing well. He and Pants amuse themselves by playing a bit of tag when Yog's door is open. Pants passes a good bit of time reclining beside the enclosure and ventures inside when  the door is open if Yogi will allow it. I think they might become buddies.

The girls are coming along, but are still not quite themselves since the loss of Mopsy. Matilda is nipping ankles less and is interacting with the cats a bit more. Today she stopped by Yogi's enclosure and had some dialogue with him that consisted mostly of grumping at each other through the wire.

Gabby's progress is somewhat slower. She is still shy and a bit grumpy. She keeps to herself and quickly runs back into her space whenever any folk approach, buns and humans alike.

They all seem to get along better with one another outside where they are less territorial. Unfortunately, it has been either too hot for the buns to go outside or it's been raining. I guess things are just going to take time. In the meantime, I'd better go refresh everyone's hay, bring out the treats, and tidy up.

I'm trying watercolor again. It's been years since I've done any painting with it. The medium has always been difficult for me and I have been rather intimidated by it. I decided it's time for that to change. After working on a few paintings, I don't feel quite as uncomfortable with it, but I think it is no easier than before. After working on this study using a photo of a painting from an old artist's magazine, I could only say to my teacher "It's hard!" Her response would be a gentle chuckle and kind words of encouragement. I draw well when I practice, but have never felt competent as a painter.

Here's a photo of the original, a still life with a Roseville vase, fruit, and money plant (lunaria), 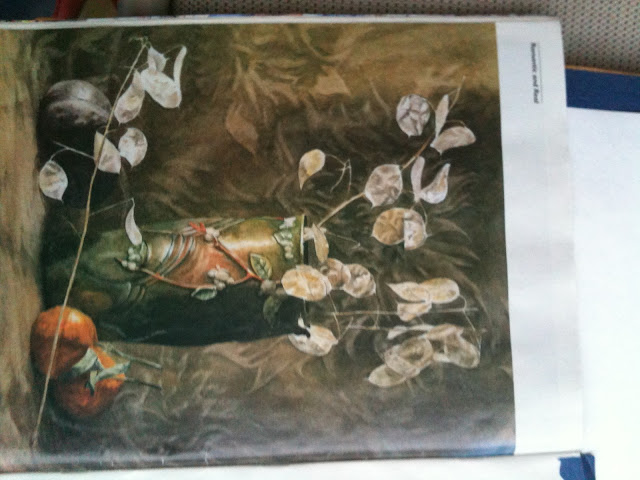 and my version. [As usual, I've loaded these with the iPhone and the format cuts off part of the photo--click to view entire photo] Obviously, I changed the colors and the fruit. I also made some changes in the background because I did not want to attempt all that design in the drapery. I might continue to tweak it a little, but I think it's mostly finished--at least I am fairly happy with my version. Fairly happy. 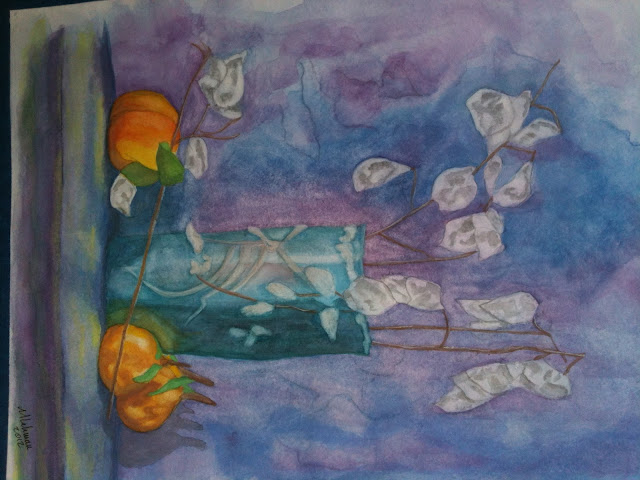 Watercolor artists amaze me. These last few weeks have given me an even greater respect for their work.  I am fascinated by their skill and the way they manage the medium. I do not know if I will ever gain any proficiency with it, but working with it during this period of time in my classes has made me want to keep trying. I just hope that at some point in the course of these classes I will become more comfortable with my painting.

I really, really do wish that Matilda would quit nipping my ankles!

Yogi is such a sweetie! He seems to be settling in and getting used to us. I know he misses his previous family, especially Ms. Ava, who was as good at spoiling buns as the rest of us. As he becomes more accustomed to his new home, his personality is coming out more. He is also beginning to cultivate a relationship with our big tabby cat, Pants (Pascal). Pants is still not quite sure what rabbits are and even though he weighs about 20 pounds, he is a little afraid of them. This has led to some humorous moments between him and Yogi, especially yesterday when Yogi hopped out of his enclosure and right onto the middle of Pants, who was sleeping belly-up beside the entrance.

I am still keeping Yogi separated from the girls. Since Mopsy died, Matilda and Gabby have not been themselves. Even though they were not what I would really call  bonded, Mopsy's absence has affected the behavior of the other two. The three of them were a bit grumpy when in close quarters, so they did not share living quarters, but they did enjoy being out in the playpens, both inside and out, where they had more space to hop around, socialize if they felt like it, or get away from each other. Now, Gabby has become very quiet and withdrawn, quite unlike her usual behavior. Matilda has become aggressive and belligerent, reverting to her old biting, boxing, and grumping actions and has bitten me on both hands and on one foot. Not nips, but honest-to-goodness bites which hasn't happened for a number of years. I have quite a bite on the fleshy part of the thumb of my left hand. I have been trying to give them extra attention, but I think it is just going to take time. I would have thought that maybe part of this is due to Yogi's presence, but they seem to mostly ignore him initially and are not housed in the same room with him at this time. Until their behavior gets a little more back to normal, I am not going to try to force anything.

(as usual, click on the photos if parts are cut off) 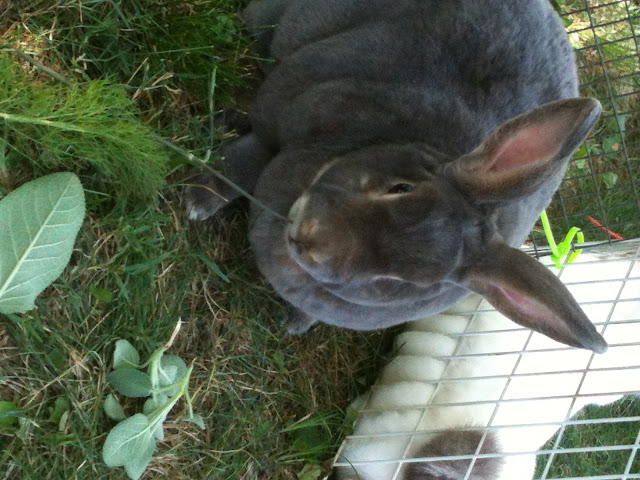 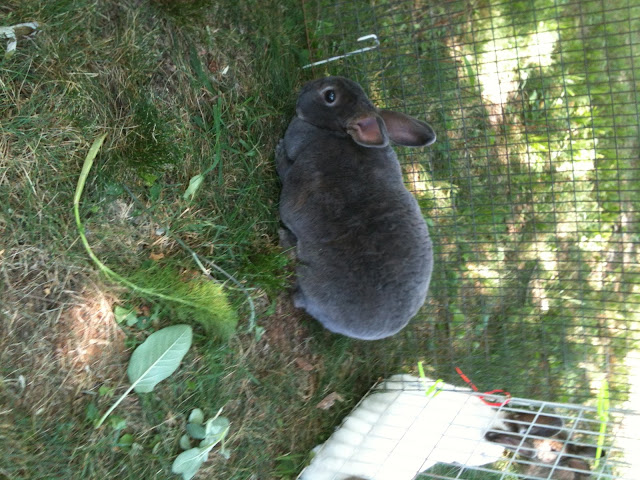 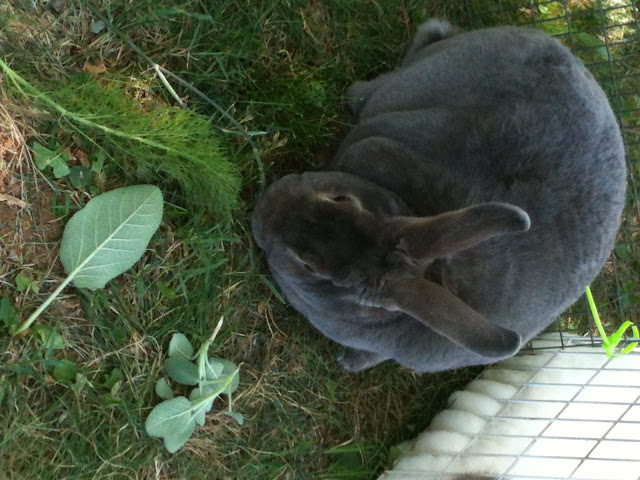 I haven't posted anything on this topic in quite some time. We went on a hike to the Madison County Nature Trail on Green Mountain today as part of our Fourth of July activities.

Interior of covered bridge over lake. 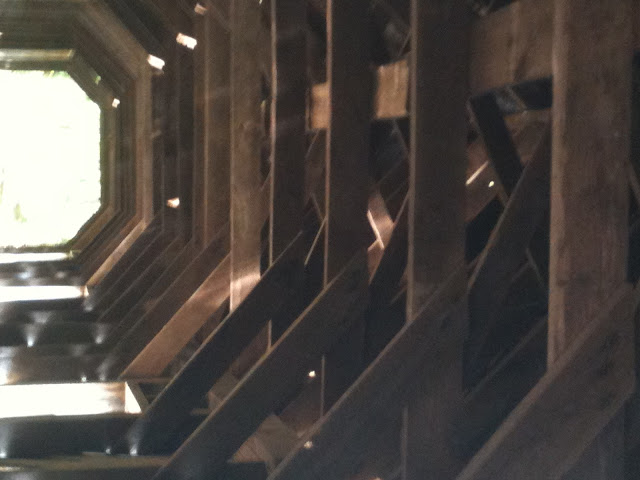 Mopsy, the retired museum bun. Five years spent at Burritt Museum educating school kids and general museum visitors about the relationship between domesticated animals and humans, then the last five here at the Huntsville Bunstead being spoiled and loved. Natural causes. She will be missed. 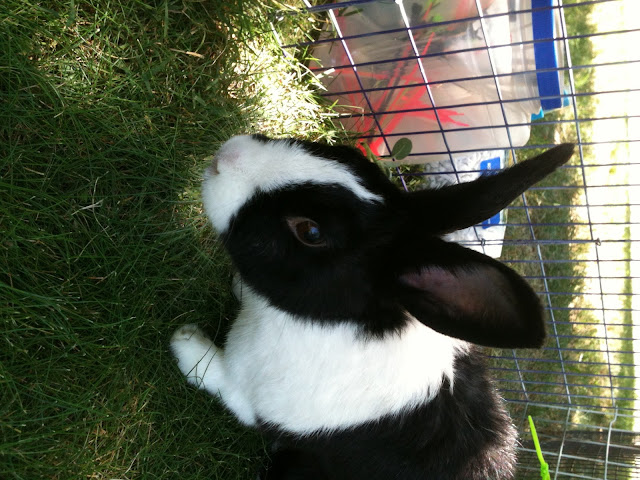 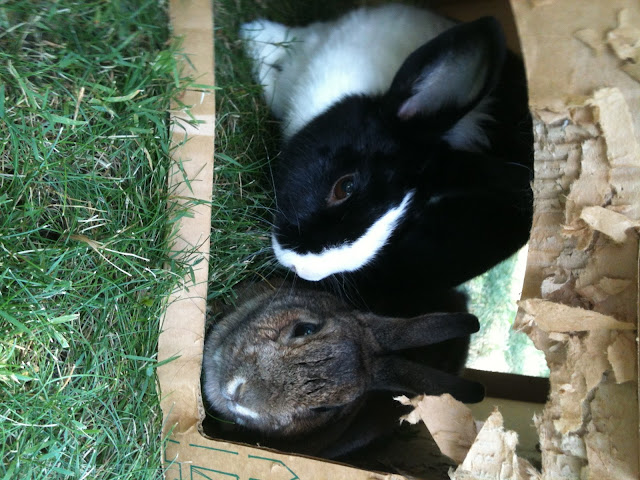 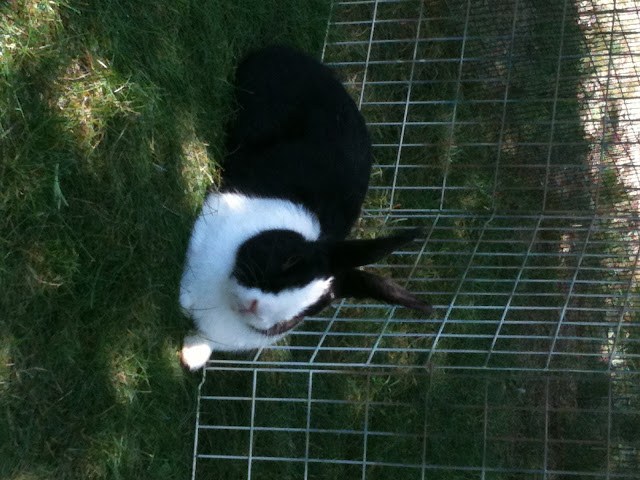 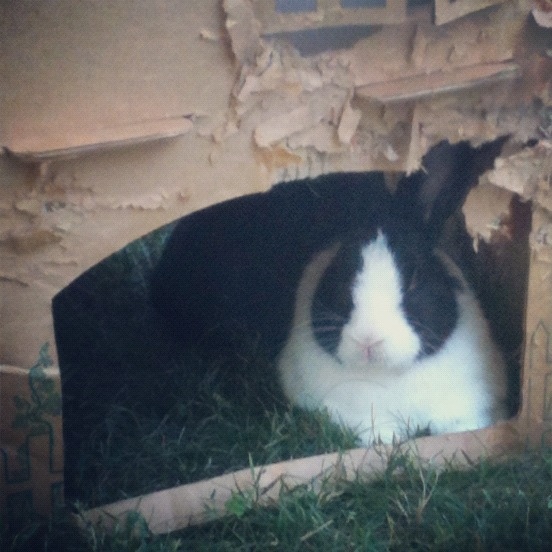