I guess I'm just getting old and don't like change. Change is good when it improves things and makes things more efficient. This new blogger mess does none of that. I really, really, really don't like it. There. I've had my say as concisely and briefly and politely as possible.
Posted by bunnits at 2:55 PM 8 comments:

Oops. No pun intended. I have had some spinning and fiber activities going on, but haven't had time to get anything posted. What follows is actually an email I sent to a friend. When I got to the end of it, I realized I should probably post it here.  It sort of explains why I haven't gotten much done lately, including reading or posting anything. So, here it is with some modification (no proofreading guaranteed).

The subject line on the email was "The hurrier I go..." and led into to the body of the message with


...the behinder I get."  I think that is a Pennsylvania Dutch saying. My Aunt Kathryn had a little framed cross stitch piece in her kitchen with that on it. It had a companion piece that said "No matter where I serve my guests, it seems they like my kitchen best." She had embroidered both and I used to use them as exemplars for how my needlework might look one day if I practiced diligently. I don't know if I ever achieved that standard for needlework, but I know that I certainly never reached her level of being able to get things done.

I just cannot seem too make any progress, get anything accomplished, or finish what I start.  Where does the time go? Why can I not manage my time more efficiently? I mean, it's not like I have a day job to keep me from accomplishing the things that need doing around here.

I am seriously considering putting myself on a schedule much like those I used to draw up for myself when I actually did have day jobs. Of course, those carefully planned schedules were constantly subject to revision. No matter how much I tried to plan my workday tasks around the usual routines and rhythms of the workplace, my daily work schedules always fell out of sync with the rest of the daily business cycle every few weeks. Things always kept changing. I tried to be flexible, even got to the point of adding extra time in the schedules to allow for delays and the unexpected that always seems to happen in the museum world, but it never seemed to work.

I'd just like to be able to get the things on my daily or weekly to-do lists done.  Maybe the secret is to have the big plan, but be satisfied with the small accomplishments each day. Even if I only get one of the five things for today finished, I should congratulate myself on that task being completed. Fine. However, that leaves the other four things I didn't get done to have to be parceled out over the remaining days, adding to the frustration of not getting things accomplished.

I always seem to be taking two steps forward and one step back. That doesn't sound too optimistic. Read on. With an even less optimistic perspective, I think that taking one step forward and two steps back might be slightly more realistic.

Oh, it appears that I have to stop now and do MomTaxi duty. Well, I hope this finds things going well with you. Sometime in the next week I might actually get an opportunity to finish the message I originally planned to write. Looking back at this message, I think I've just composed a blog post!


That email sort of describes the way things have been going lately. And, yes, I've read all those things about the habits of highly successful people. For me, it's more like what the old Gilda Radner SNL character, Roseanne Roseannadanna, used to say, "It just goes to show you, it's always something..."  I'm trying not to let my lack of posting and not getting to read all the neat posts my fellow bloggers share add to my frustration over not getting much accomplished. I am trying to focus on just one thing at a time, not let distractions prevent me from making progress, and minimize my taxi service duties (which, at least, is somewhat reduced because of the semester break). In the meantime, it does seem that the hurrier I go, the behinder I get.
Posted by bunnits at 10:05 AM 10 comments:

So nice to have Twink back at work 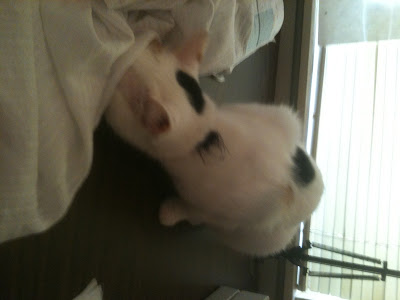 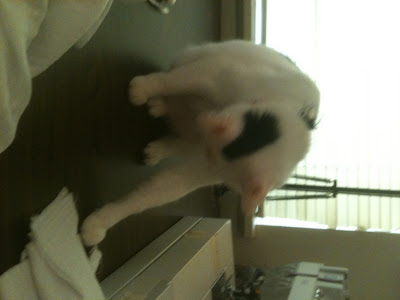