I caught Twinkie in action in the window last summer when our AC was out...
(click on photos to enlarge The Twink) 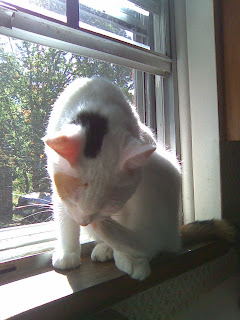 Time for a good scratch 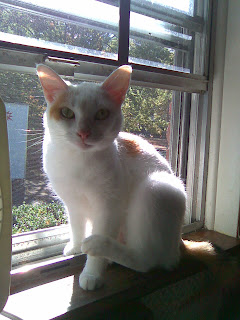 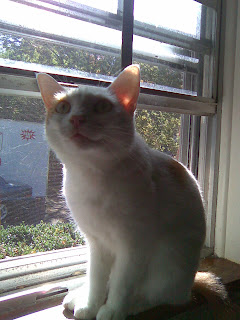 What do you mean you have other things to do? 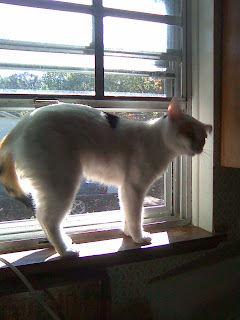 Can't believe I have to do this myself. Maybe I can push it up this way. 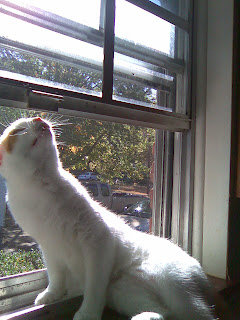 Let me take a good look at this thing. 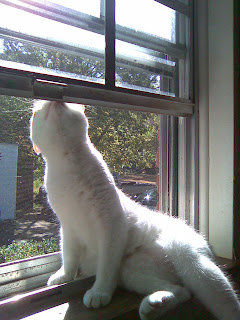 Something here makes it work. 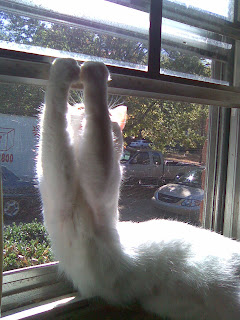 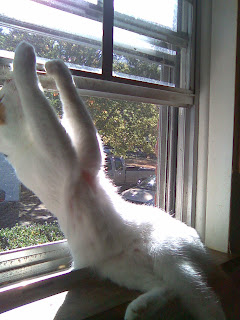 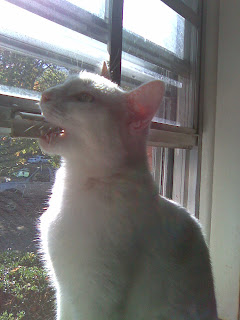 Things in the Sky Tonight 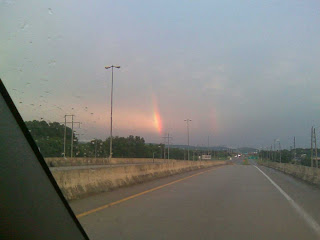 After a late thunderstorm yesterday, there was an incredible rainbow in the east as the sun was setting. I was unable to photograph all of it because of the amount of sky it covered. The northern portion of the bow, although fairly faint, was visible from about 500-800 feet up and extended all the way up and across the sky to an elevation of at least 75 to 80 degrees, but then appeared to be obstructed by clouds. I think it was actually that the sun was so low in the sky that the prismatic phenomnenon of the sun shining through water droplets did not occur. The southern portion of the bow was mostly obscured except for the lowest portion which was extremely brilliant and presented a double bow image. Because I was driving and had access only to my cell phone camera, I was unable to get photos. When I could, I pulled off the road and got the southernmost part that, by the time I could photograph it, looked more like a sun dog than a rainbow. I have never seen such intense colors. The "trail" to the left of the the bow fragment is not a camera effect, but the brightness of the sky.The double portion of the bow is faintly visible to the right. This photo does not do justice to the brilliance of the light and color. It was made from the side of the road through the windshield of the van. Apologies for light poles, power lines, car interior, etc. When I tried getting shots out the car window, I got more street "stuff," gave up and just took what I could. Of the several photos I took, this one shows the intensity of the color of the bow the best. Click to enlarge.

This evening while sitting outside enjoying a banana split at a local ice cream shop, I began looking for sun dogs as the sun was setting. I didn't see any, but on the way home I did get a real surprise when I spotted a sun pillar. For more information check the Atmospheric Optics site.
Posted by bunnits at 7:48 PM 5 comments: