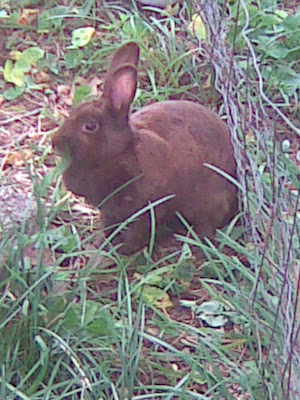 Last Monday morning I when I went to feed the Buns, I found that my dear, sweet Bobbin had departed this world. She was such a gentle bunny. Her loss has left an empty space in my heart.

I can only find two pictures of her. I had deleted others I'd made because I thought I would be able to make better ones at other times. I had no idea how little time she had left. 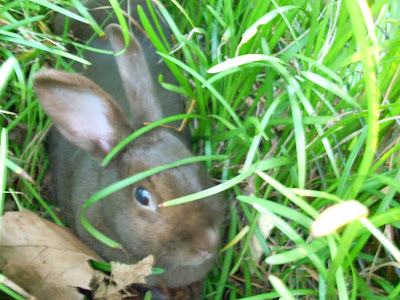 In memory of Bobbin 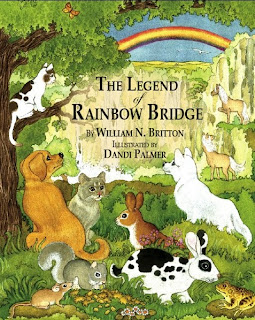 Just this side of heaven is a place called Rainbow Bridge.
When a pet dies who has been especially close to a person here on earth,
that pet goes to Rainbow Bridge.
There are beautiful meadows and grassy hills there
for all our special friends so they can run and play together.
There is always plenty of their favorite food to eat,
plenty of fresh spring water for them to drink,
and every day is filled with sunshine so our little friends are warm and comfortable.
All the pets that had been ill or old are now restored to health and youth.
Those that had been hurt or maimed are now whole and strong again,
just as we remember them in our dreams of days gone by.
The pets we loved are happy and content except for one small thing.
Each one misses someone very special who was left behind.
They all run and play together, but the day comes
when one of them suddenly stops and looks off into the distant hills.
It is as if they heard a whistle or were given a signal of some kind.
Their eyes are bright and intent. Their body begins to quiver.
All at once they break away from the group, flying like a deer over the grass,
their little legs carrying them faster and faster.
You have been spotted, and when you and your special friend finally meet,
you hug and cling to them in joyous reunion, never to be parted again.
Happy kisses rain upon your face.
Your hands once again caress the beloved head.
You look once more into the trusting eyes of your pet so long gone from your life,
but never gone from your heart.
Then with your beloved pet by your side, you will cross the Rainbow Bridge together.
Your Sacred Circle is now complete again.
(Reprinted with permission of the author. Published 1994. Copyright © William N. Britton. www.legendofrainbowbridge.com)

Not the Blue Jeans, Part 1

or How I thought I would die in "The Doldrums" of Tristes Tropiques, but found myself in anthropology


The subject line on the email reads, "The passing of Levi-Strauss." Not paying much attention at all, completely ignoring that little hyphen, I think that someone on the folklore list is probably doing a project on the history of those wonderful denim pants. I go to the first link and am quite chagrined that my first impression was not appropriate for my academic upbringing. Claude Levi-Strauss, a major figure in anthropology, has died at the age of 100. My chagrin is not so much because I thought of blue jeans first, but more because I spent hours immersed in the work of Claude Levi-Strauss for a term paper assignment for a class in world cultures as an undergraduate.

I don't seem to be able to insert links at this time, so for more information, copy and paste the following:
http://voices.washingtonpost.com/postmortem/2009/11/claude-levi-strauss-dies-1.html
and
http://www.nytimes.com/aponline/2009/11/03/world/AP-EU-Obit-France-Levi-Strauss.html?_r=1&scp=2&sq=Levi%20strauss&st=cse 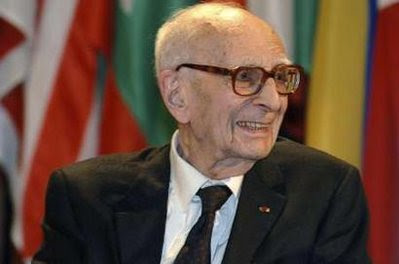 
I had just started taking classes at Memphis State University (now University of Memphis, it will always and forever be Memphis State to me). I was a married student transferring from the University of Tennessee in Knoxville--a difficult move for me because of the wonderful anthropology department at UT and the graduate program in forensic anthropology and archaeology with Dr. William Bass that I planned to pursue (still can't insert links, but check out: http://www.upenn.edu/gazette/0900/0900pro1.html, http://www.jeffersonbass.com, and http://web.utk.edu/~fac/). This was back in the 70's before forensic science had become such an entertainment phenomenon and the subject of a large percentage of popular novels and TV shows, to which I admit being addicted. Yes, I read Patricia Cornwell, Kathy Reichs, and others. I watch CSI (all of them, although my preferences are Las Vegas and Miami), Bones, and NCIS, even the reruns I've seen too many times to count. Alas, life happens, and my pursuit of that career was not to be. There was some solace in the fact that Memphis State had an anthropology department with a graduate program, so all was not lost, but it required a major shift in my career plans.

I'd been out of school for a couple of years and had a child of six when I decided to enroll at Memphis State. I was in a bit of a quandary as to what to do about my major. I'd debated earning a double major in anthropology and art at UT, having accumulated an equal number of hours in both, although I had not officially declared such. Aside from the fact that I loved both anthropology and art, I had a sort of plan that if I did not make it in forensics (a tough and demanding program) or archaeology, I might become an illustrator for anthropological publications.

There was no forensics program at Memphis State. In 1977, their graduate program in anthropology consisted of three tracts: medical anthropology, urban anthropology, or museum studies/historical archaeology. For me, it was an easy choice not to pursue the urban tract. Medical was of interest to me, but not with what they were doing at Memphis at that time. The museum studies/historical archaeology tract was definitely of interest and quite promising because I had always loved museums and, from the age of about ten, thought that someday I might work in one. I did not realize at that age that a major in anthropology or art would be useful for this type of career.

My mother wanted me to study English at George Peabody College for Teachers (now Peabody College of Education and Human Development at Vanderbilt University), come home, live with her and Daddy, and teach high school English in our home town. Generally, her word was Law, but I don't remember ever being very excited about having that as my life plan. Well...the English major part, maybe, since I loved literature and poetry, having been mentored from an early age by our high school English teacher, Evie Mae Ross, who lived next door. It was decreed: I would major in English. Well, once again, life has a way of changing things.

My married sister moved to Washington, D.C. during my junior year in high school. It was the usual family plan that I spend the duration of my summer vacation with her. She and her husband and toddler son lived in an apartment within walking distance of the Smithsonian, the Capitol (I could see the dome from my bedroom window), the Library of Congress, and other famous Washington landmarks. I spent my seventeenth summer wandering around the Smithsonian museums almost daily. I was in museum heaven. This was truly inspiration for pursuing a job in museum work. I aimed high. Yes, someday I would work there. The Museum of Natural History, The Museum of History and Technology, and the National Gallery of Art were targets of my museum ambitions. In the meantime, Mama's Law stood and I began my college years as an English major at Tennessee Technological University.

Would there be a career in museum work in my future? Would I become an archaeologist? Would the time come when I would see the words "Levi-Strauss" (with the hyphen) and think of something other than my favorite pair of indigo-dyed denims?
Posted by bunnits at 7:13 AM 4 comments: