Well, it’s about time! Despite my best efforts, I just haven’t been able to get around to getting the butter making event posted. Here goes!

We might have to call this Chapter 1 because it's going to run a little long. I don’t plan to get highly technical with this, so if you want more science, there are a number of really good sites out there on the internet and I encourage you to look them up. One of my favorites is http://www.webexhibits.org/butter/making.html">Butter.

I did not grow up on a farm. However, I did grow up in a predominantly agricultural area of Tennessee and lots of folk churned butter, including my aunt who would let me try it now and then. My academic background is in anthropology and archaeology, not food science. Through research, I am acquainted with the basic science of the process and even had the opportunity to talk with a chemist about it. It can get very technical. In preparing for my work as a butter churner, I had numerous sources such as the excellent Foxfire series and other first-hand accounts collected by folklorists from those who churned many pounds of butter over the course of their lives. When I do the butter making demonstrations, I usually incorporate a little science into the process because it is really interesting, but I don’t want to take up so much space, so I’m giving you an assignment: go look it up! For this entry, I will mostly just do this off the top of my head and not go look up the more technical information to include. I hope I am not disappointing those of you who want more.

Before I begin, I should probably explain a few things. The living history museum where do my 19th century thing focuses on rural North Alabama farm life in the mid- to late 1800s. There are a number of actual 19th century farm houses and other structures that have been relocated to the site and restored in order to give the visitor a picture of life in another era. We have interpreters who wear reproduction historic dress and engage in a variety of activities that would usually be done on a farm during the time period. We do third-person interpretation rather than first-person interpretation. That means that we are not trying to portray a specific individual who lived in one of the houses or even create a fictitious persona of the time period. We wear the type of clothing and do the activities of the time, but explain things as modern folk who like to help others understand and appreciate the past and who like to dress up in silly looking clothes and get hot, sweaty, and dirty in the summer and cold and dirty in the winter. Being a living history interpreter is a great way to both teach and learn history. At our site, we try to be as accurate as possible in our depiction of daily 19th century life, but when we have events and have to accommodate large numbers of people and allow them to join in the activities, we can't always stick to strictly period methods or materials. This is the case with the butter making activity that I am about to share with you. In my photos, you will see things like paper towels, plastic sandwich bags, paper plates, and other things from the present that make it a little easier for people to enjoy the experience.

Traditionally, making butter by hand is done by saving the cream (the milk fat) from your cow's milk until you have enough to churn into butter. If you have more than one cow, it doesn't take as long to accumulate enough cream. The basic steps involve milking the cow, then allowing the cream to rise to the top of the milk and skimming it off, then putting the cream into another container (the butter churn), usually allowing it to set out at room temperature overnight, then agitating it until the fat molecules began to stick together or "gather." After the butter has "gathered" or "come," it is removed from the churn and worked and rinsed to remove the buttermilk from it. This improves the texture of the butter and allows it to keep longer because milk that is left in it will sour before the fat goes rancid. Once this step is finished, the butter can be put in a butter mold to give it a nice, decorative shape or it can be shaped into a "pat" (a rounded ball of butter) by hand and wrapped in butter paper, placed in a butter crock, or just put on a small dish.

Here is a photo of a young lady hard at work at her churn. The cloth that is wrapped around the top of the churn is to prevent the cream from splashing out as the dasher (the long handle sticking out of the churn; it has an X-shaped attachment at the bottom to increase the agitation) is raised up and down in the churn to agitate the fat molecules. Hmm. It appears that she needs a little help in getting the dish towel wrapped back around the top of the churn. She was a good helper. 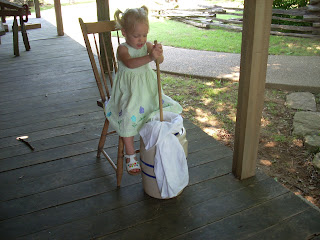 I haven't been able to get anything posted for a few days, so here's a little bit before I go do my thing at the local living history museum today. The monthly "Step Back in Time" evens focus on some aspect of 19th century farm life. Today is Dairy Day. I will be manning the butter making station all day. There will be a couple of churns for folks to try their hands at making butter the old-fashioned way, but the real hands-on part involves putting a little heavy whipping cream in a Mason jar and shaking it (with the lid on) until it forms butter. This is always a big hit for Dairy Day and I'm kept busy all day helping kids and adults make butter. People don't usually want to try it until they see me make some, then they are enthralled and want to try. The whole thing takes about five minutes. Amazing! I even have folks come back for a second or third go at it. I'll try to make pictures to post later.

Have a great weekend!
Posted by bunnits at 5:42 AM 1 comment: