I don't usually post photos of the yarn I spin because I am never happy with the color quality. I've tried various settings and lighting, but the colors are rarely accurate. I decided to just forget it and throw this one out here. It would have been better to try during the day in natural light, but I didn't feel like waiting. Tomorrow something else will come along to require a goodly portion of my time and I 'll miss the blogging window. Except for being a bit more green and gray than the real stuff, this was the best setting on the camera. Everything else yielded mostly reds and oranges, which was worse than this. Maybe I should have turned off the table lamp and used the ceiling light. It looks a little better when I tilt the screen a bit. I do have a friend who has agreed to photograph my yarn, but there's always the schedule thing to work around. It's kind of hard to believe that my work used to involve photographing artifacts and doing detailed photos for archaeological sites. Oh, heck. Never mind all that. This is the creative medium that I have spent most of the past nine years on. The return to drawing doesn't mean that I will give up spinning. No way! I just feel the need to get back to that other part of myself. 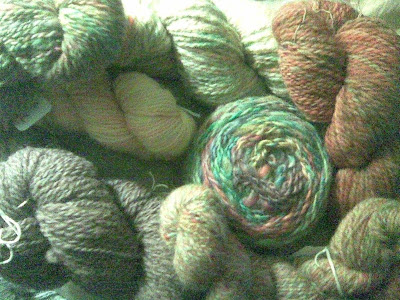 Backsliding, a New Venture, and Some Old Drawings

(apologies for problems in font variations and text size in this post--no clue what happened and can't seem to fix it--the more I try, the worse it gets, so I'm just leaving it alone)

I thought I'd be able to resume at least weekly posts when I got more computer access, but that hasn't been the case. I'm just too tired. I also still have to get the hard drive from the other laptop I was using and get that stuff put on this one or on an external drive so that I have access to photos I uploaded to it before it died. I just want all of you to know how much I enjoy keeping up with your blogs. They make me smile. I have mostly worked out the comment problem and seem to be able to comment most of the time.


I am treating myself to an art class. A lovely lady who lives only a couple of miles from the house is a retired art teacher and gives lessons in the medium of your preference at her home. My sister-in-law wanted to try oil painting and started taking lessons from her last year. She let me know that a space had opened up in the class. I went for the first time yesterday.For the past 9 years I've been devoting almost all my creative energies to spinning and it has been years since I've really done any drawing. I was a bit apprehensive because of being so out of practice. The teacher asked me to bring some stuff I'd done in the past. I got a little dose of reality regarding the passage of time when I looked at the dates on some of my drawings. 1976, 1981, 1993! Yikes! After being a little creaky at the beginning of class and having to get used to really seeing my subject, I began to get the eye-hand coordination warmed up. I think I will be working on drawings with colored pencils for some time (love those Prismacolor pencils!). I'd like to get back to block printing, too, but for now, drawing.


Here are some old drawings from my early classes. I apologize for the quality of the cell phone photos and lack of cropping.


I remember at UT that we began with charcoal drawings of things the instructor would devise ranging from piles of easels, piles of shoes, our own hands, drift wood, sea shells, draped fabric, and more. Here are a few hands. 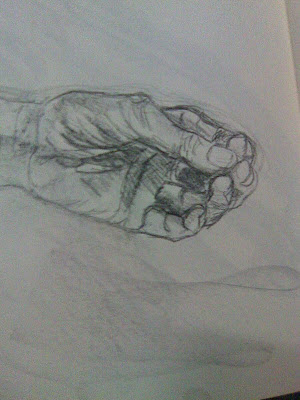 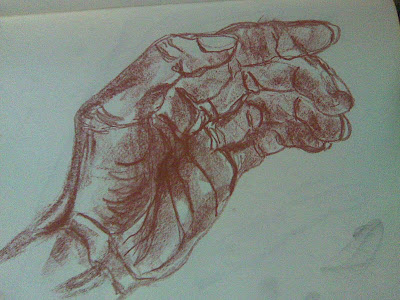 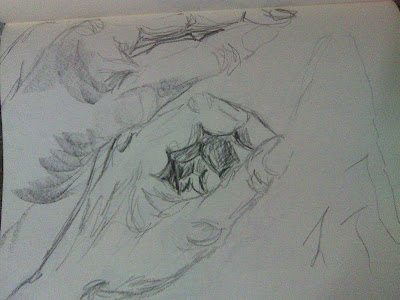 some scribblings of the same old hand, black conte 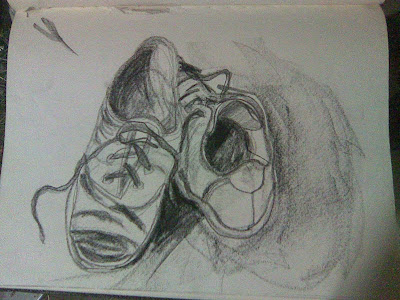 yellow and blue sneakers belonging to No. 1 Son at age 5, black conte, unfinished

Years later I took a few classes from a local artist who was involved with our art league. His work is quite interesting and, although he insisted we "do our own thing," I tended to lean a bit in the direction of his work for a while, in order to get myself to do some other things with my drawings. He often had us do a collage and then draw it. The first time he gave us that assignment, he brought in stacks of magazines and told us that for the next few weeks we'd be working with collages. About halfway through the first collage session, we presented him with our finished compositions, eagerly awaiting his remarks. He told us we had all done interesting and creative pieces and finished his remarks with "Now draw your collage." That was quite a surprise for us. Some people had chosen elements for their collages that they would not have chosen (or especially wanted) to draw. Many were quite challenging. I've only put in this one bit of a larger collage because the entire drawing looks like a nightmare someone would have after watching "The Birds." 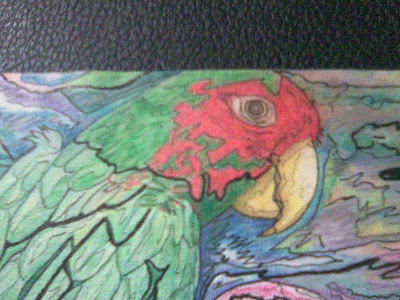 Now, this is Elvis. Elvis is nicely and professionally framed and I did not want to try to get it out of the frame in order to photograph it. I have tried several times with a variety of lighting conditions to get a good photo of this drawing, but it isn't happening right now. Elvis began in 1981 as a pencil drawing on white paper of a photograph of a windblown male cardinal from an issue of a nature magazine that someone gave me one day in the archaeology lab when we were probably supposed to be sorting and cataloging artifacts. Actually, I did the drawing at home, but we were taking a break from the tedium of the daily lab grind to look through issues of neat photo magazines someone had brought in. Time passed. I was looking for something to give my favorite aunt for Christmas in 1993. She loved birds. I ran across the drawing of Elvis and was in the middle of my art league classes. I decided to do Elvis for her in colored pencils, but he just didn't look all that great on white paper. I experimented with other colors and really liked black for the background. After I got it finished, I realized it was not unlike those tourist shop offerings we often saw up in East Tennessee and other places that featured paintings on black velvet, which were often of matadors or Elvis Presley. Hence, the name. I wish the photo quality was better. I managed to crop out the worst of the reflections on the glass. It really is a nice drawing. My aunt loved it and she hung it in a prominent place in her living room where it stayed until last June. She passed away two years ago, then her only child passed away last year. I asked for Elvis back when her house was being prepared for auction. One of these days I might be able to get someone who knows what they are doing to make a better photo of it. 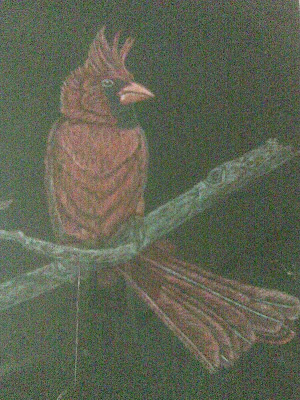 Elvis (under glass), 1993, colored pencil on black paper, from a 1981 drawing of a photo published in a nature magazine

Okay. I thought I had one set of computer problems mostly solved, but last night I discovered that I am currently able to post comments to only a few of the blogs I follow. I've had a similar problem in the past, but was unable to post comments at all. I haven't found the cause or been able to overcome it, yet, so have to work on that. I am back to reading everyone's blogs, but just can't get the comments button to work on all of them. In the meantime, it is going to take me a while to become accustomed to this computer and Windows 7. At least I feel as though I'm back in circulation and can enjoy all the bunny antics and other neat stuff.
Posted by bunnits at 1:41 PM 5 comments:

What Dreams May Come 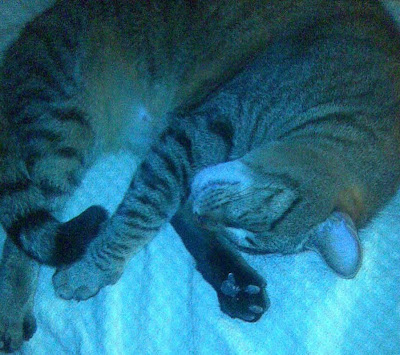 Pants was sleeping beside me on the sofa the other day as I watched TV and caught up on some knitting. I began to hear intermittent thumping sounds that gradually got louder. Turning in the direction of the sound, I discovered that Pants was thumping his tail in his sleep and his tail was all bushed up to about twice its normal size. He often gets a bushy tail when something frightens him, when he's engaged in some really serious play, or when arguing with one of the other cats. He was obviously dreaming about something. I wonder was happening in the dream that made his tail bush up. He's such a sweetie. I hope it wasn't a nightmare. 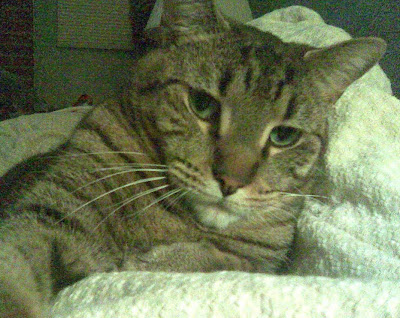 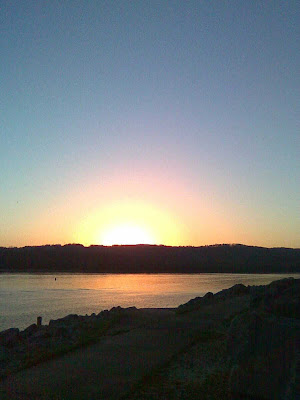