I have not given up on my Trips West 2013 posts, even though I know some/most of you find them as exciting as home movies and slide shows (slide shows--remember when we had those things called slide carousels full of photos in slide format and bored family and friends with them at holiday get-togethers?). More to come. I have been a bit tied up with trying to finish some spinning projects and getting acquainted with a delightful little loom I have acquired. In the meantime, I'm sharing some equally exciting photos of random stuff that makes up my life. My apologies for the erratic spacing of the photos. I don't seem to have control of it or know what to do to fix it. Still working on that.

The spinning project. Hand dyed and blended by Yours Truly. Fiber is a blend of mostly alpaca, some sheep's wool, and a little bit of sparkly stuff. 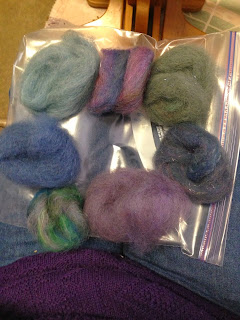 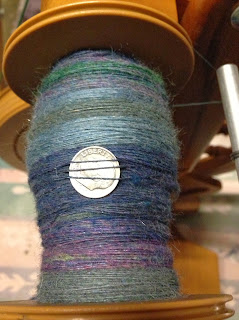 Some of the yarn. This thin stuff takes a while to spin. I'm almost finished with this step, but next I have to make 2-ply (2-strand) yarn out of it. That won't take as long once I get around to doing it. I have to knit a lacy scarf after I finish the yarn. 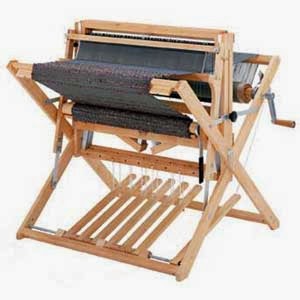 New-to-me portable loom. A Schacht Baby Wolf. Folds up and fits into the back of the van so that I can carry it to workshops. (photo from the Schacht files) 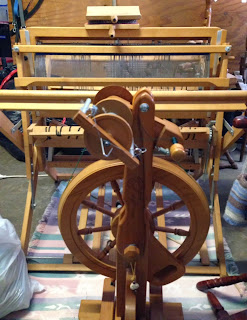 A shot of the Baby Wolf (to give a better idea of its size) and my Majacraft Rose spinning wheel in the garage space that has become my temporary fiber studio while I rearrange space in the house to make room for the loom. 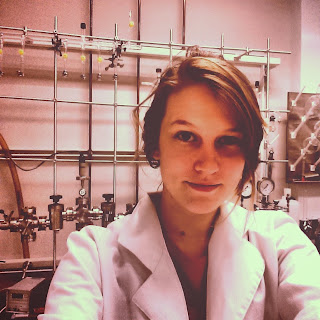 Daughter in the chemistry lab storeroom at UAH. Weird lighting makes it look like she has a black eye. It's just the shadow created by her hair. 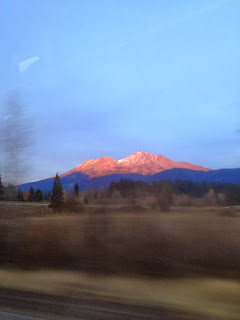 Mt. Shasta at sunset with alpenglow. Photo taken by Number 2 Son. He's gone to California for a few weeks and is staying in the town of Mt. Shasta. He gets to look at this beautiful sight whenever they go anywhere. 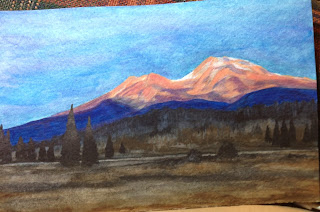 His photo prompted me to do this small watercolor for him as a keepsake of his adventures in Northern California. 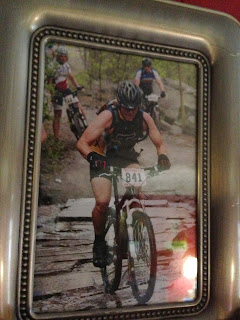 A photo of a photo and the real reason I haven't been doing much. My dear nephew doing what he loved--competing in mountain biking events. His favorite place to ride and compete was in the Colorado Rockies. I like to think that that's what he's doing now.


Last one.
We had a spectacular sunset the other day. Too bad there's no way to capture the beauty of it with a cell phone camera. 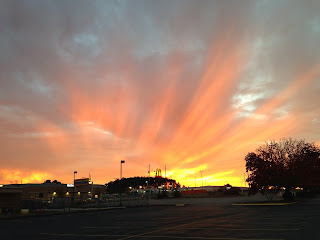 After a little sidetracking to do some hectic yarn spinning (fiber type yarn, not tall tales),  I'm back on the trail of places we visited during the summer.

Walnut Canyon National Monument (click for more info) is located near Flagstaff, Arizona. The monument is the site of some early inhabitants of the area who lived there from about AD 1100 to 1250. Exactly why they left is unknown. Personally, I'd say climbing up ladders to get home at the end of a day of tending crops would do it for me. Acutally, they might have been climbing down ladders to get to their dwellings if they planted crops up at the top of the canyon. There is considerable plant diversity in the area of the canyon. The inhabitants focused on growing corn (maize), beans, and squash--the "big three" of North American archaeology. The elevation at the top is 6700 feet and the bottom of the canyon is about 350 feet below. None of the cliff dwellings is accessible to the public, but may be viewed from the trails and visitor center.

Stay tuned. More to come. We still have Sedona, Meteor Crater, Petrified Forest, and more to cover.
Posted by bunnits at 6:50 PM 6 comments: