I could not find the larger of the two monarch caterpillars yesterday morning. I found that the smaller one had shed its skin and took that as a good sign. My son came out onto the front porch as I was looking for the bigger one and told me that there was a caterpillar on one of the chairs. Since it was attached to the chair arm and beginning to go into the "J" position to form the chrysalis, I decided to leave it alone and put some cord on the chair to keep people from sitting in it. I was really looking forward to watching the rest of the metamorphosis. 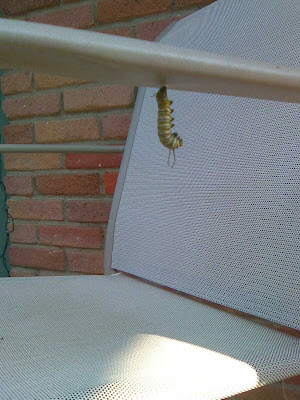 I was surprised to find it on the chair because I had already covered the milkweed with tulle after finding the caterpillar under one of the leaves. I wondered how it had managed to get from the plant to the chair. I did leave a small portion of the plant uncovered a few inches from the ground. The caterpillar would have to crawl across the flowerbed, up the brick, across the porch, and up onto the arm of the chair. One of the black swallowtail caterpillars had done a similar escape act from the butterfly cage I'd made earlier in the summer and made its way up to a plant hanger hook at the top of the porch, but it only had to crawl up the length of the cage to the hook where the cage was hanging. I've never had them do this before. 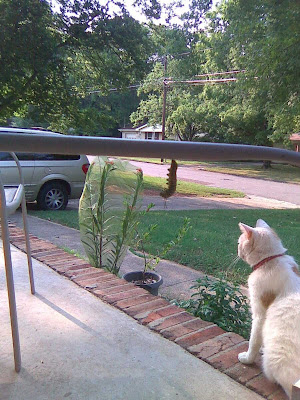 Unfortunately, later when I returned home around 2:00 in in the afternoon, I discovered that the caterpillar was not doing so well. It was limp and had straightened out. I feared the worst. I checked it out as best I could and was not hopeful. I left it overnight and by morning was certain that it was dead. 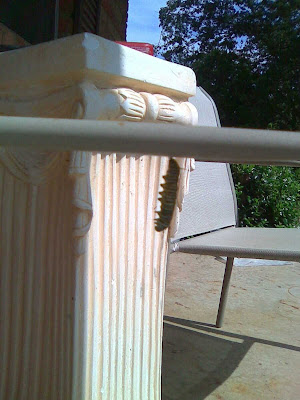 I removed it from the arm of the chair and put it under some mulch near the base of the milkweed plant. I have been unsuccessful in locating the smaller caterpillar this afternoon and have not spotted any smaller (or larger) ones on either of the plants. Perhaps others will hatch and grow into butterflies to make the flight to Mexico.
Posted by bunnits at 11:52 AM