Why the Neighbors Think I'm Crazy: A Tale of Two Fleeces

Twenty feet (20' 4" to be exact) of sheep's wool stretched out to dry in the sun on the walkway in the front yard. 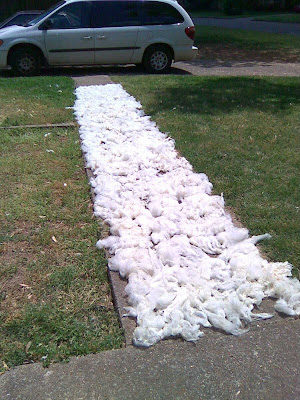 Remember when I said that I didn't think there would be more fleeces in my future? Well, I was wrong. When the local fiber shop did not have any of the types of wool that I like to use for my beginning spinners, I was thinking of having to order it from internet sources, a time-saving, labor-saving thing to do, but not very economical when I am, for all intents and purposes, doing these two workshops for the fiber guild as a member-volunteer and only charging the participants a supply fee which has been prepaid. Because there is also preparation on my part, I did not want to have to wait for shipping, either.

So. . . . I started digging in the plastic storage boxes. Guess what I found? Two fleeces that were in great shape. Mostly. One was a complete Suffolk fleece that had passed its time in suspended animation quite well. This fleece came from one of the museum's sheep and was given to me during one of the Spring Farm Days a few years ago. This just happened to be the bag of wool that was on top of the Romney fleece I mentioned finding recently. The other was an entire Cheviot fleece that was given to me about two years ago by a spinning student of mine whose family raises Cheviots. Boy, was I delighted to find this great supply of Cheviot fiber! Now all I had to do was wash and wash and wash and wash fleece. My favorite thing? Not exactly, but I did discover with the Romney that the trampoline makes a great place to process wool. I'll spare you all the nasty details of how I spent a day and a half, Monday and yesterday, washing two fleeces and drying them on the trampoline. Of course, it rained Monday night and and was cloudy part of Tuesday, so that slowed the drying process.

Did I mention that I am in a time crunch here? Yes, the second of the spinning workshops is Saturday. Today was a beautiful, sunny day, so I made use of the warm concrete surface of the front walkway to dry the Cheviot. I think the neighbors always wonder what on earth I'm up to whenever some strange thing appears on the front porch or the yard. The back yard is mostly shady, so the front often provides a great place for me to work on things that require lots of sun, like drying papier mache projects such as masks, bowls, jars, hams. Hams? Yes, I am the faux food queen, having saved the living history museum $800 one year by making life-sized fake hams for the smoke house. Had they ordered them from a real fake food company (yes, I said that), they'd have paid $200 each for the four they wanted. Someone realized I was adept with papier mache and I was drafted to make hams. They even brought in a smoked country ham to the museum for me to photograph and examine to use as a model, but more on that at a later time.

Back to the fleeces. I spread the Cheviot out on the front walkway. I hoped the cats would stay out of it and they were quite cooperative. Until the very end when Pester decided to make biscuits in it. Here are a few photos of the lovely stuff drying. With cats. 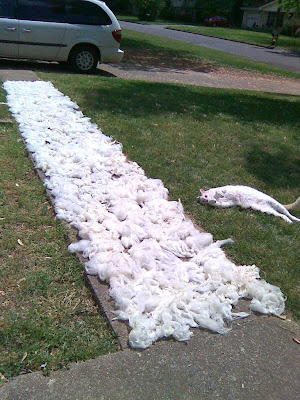 Petcat relaxes by the fleece. 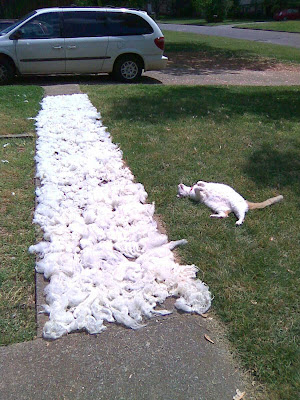 He becomes overwhelmed thinking about all the work that has already gone into processing and finding out that I am not yet finished. 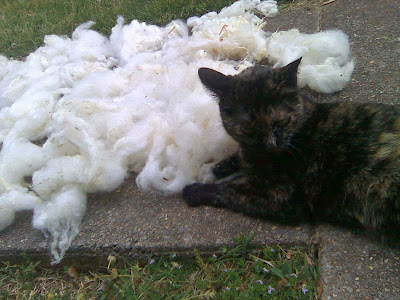 Pester takes her chances and gets closer. 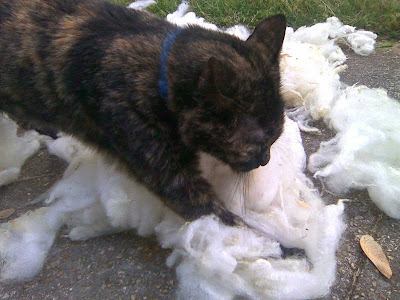 She can't resist making a few biscuits, but I keep a sharp eye out for any additional cat shenanigans.

I did mention two fleeces at the beginning of this post. I left the Suffolk fleece drying on the trampoline. I decided to use Kool-aid to dye a major portion of it so that the students could have fun with some colored wool and could experiment with blending on the drum carder. Kool-aid is a quick, non-toxic, readily available, and inexpensive way to dye protein fiber like wool. I did not want deep, intense colors, so I experimented and got just about what I wanted, but the photo doesn't show the colors well because of the shadows from the trees and the washed out areas caused by the sunlight. The flavors/colors I used were Orange, Cherry, Strawberry, Black Cherry, Lemon-Lime, Yellow, and Berry Blue. 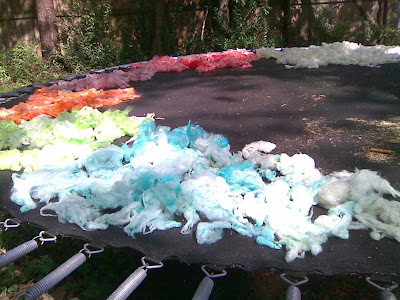 Now all I have to do is get all the little bits of pecan blossoms, leaves, beetles, and other delights out of the fuzz so that I can card up roving for the students and they will have a good supply to card themselves.
Posted by bunnits at 3:09 PM