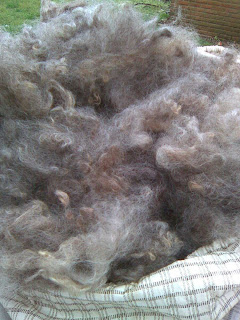 I had a pleasant surprise today. While digging around in plastic storage bins in the garage for something completely unrelated to spinning, I found a bag containing a lovely Romney fleece that I had forgotten about. In fact, I thought it had been necessary to throw it out when we had the garage fire. The photos that follow show the fleece spread out on the trampoline, the color variations in the locks, and the staple length. 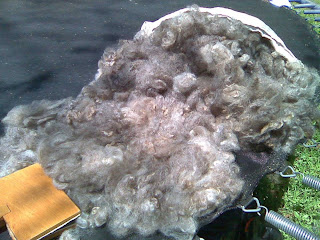 This fleece was given to me for Christmas in 2001 by my first spinning teacher. It was beautiful. Because I was a novice spinner and had not processed a whole sheep's fleece before, I was reluctant to try to scour it. I was afraid I would ruin it and end up with a felted mass of fiber. It was winter and I really wanted to wait until warm weather so that I could work on it outside, but I was afraid that if I waited too long it would get really sticky and nasty if I left the lanolin, dirt, vegetable matter, sheep crud, and other rather unpleasant stuff on it. However, it was very clean for a raw fleece, so I decided to wait until warmer weather. For several weeks I would just open the box it came in and look at it, feel the fiber, smell the sheepy smell, and think of the beautiful yarn it would make. 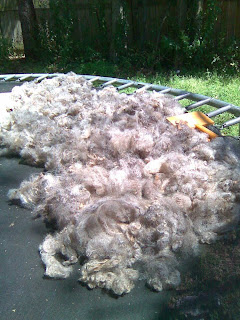 As the months passed, I finally got up the courage to work on it a little at a time, pulling out a handful of locks and washing them in a series of wire mesh colanders in a dishpan at the kitchen sink. I'd place a layer of locks in one colander, then put another layer in the second and third colanders, stack them one inside the other, put a fourth colander on top to keep the locks in place, then proceed through the washing process. The mesh colanders were great for processing wool because I could wash, rinse, and dry a batch of locks in the same container. The mesh construction allowed air to flow through the fiber and shortened the drying time. As is often the case, things came between me and my beautiful fleece and I had to put it away for a while. That turned out to be a very long time and eventually I forgot about it.

While digging in the garage a few years later, I found the box marked, "Romney fleece." I gasped as I realized how much time had passed and dreaded opening the box to see what a ruined mess I might find. To my relief, the fleece was in good condition. I took it up to the living history museum where I w 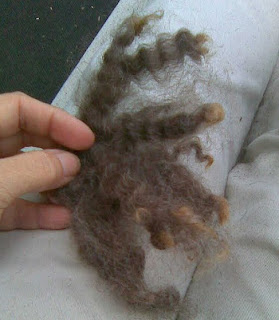 orked and finally got it all washed and dried. I spun up a little of it as other duties permitted, but there were always several fleeces from the museum's sheep to be processed and spun, so I brought it home to work on. Again, other things in life took priority over the fleece. It was put away with the best of intentions of getting it all spun when things calmed down, then it just sort of faded away and drifted out of my mind. During this time, I acquired a few other fleeces or parts of fleeces that I scoured at the museum or here at home when time permitted. I probably had five or six from various breeds that needed to be carded and spun. As always, the 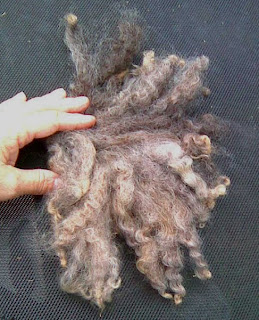 se were stored in cotton bags and placed in storage bins with herbs to deter moths.


When we had the fire in the garage, many storage bins and boxes were destroyed or damaged. Cleaning up seemed to be a never-ending process that was also mentally and emotionally draining. I had to throw away some of the fleeces I had accumulated. The Romney turned out to be one of the three that survived and were put away once again for that time in the future when I might get the urge to mess with fleeces. That was eighteen months ago.


Washing and carding fleece has been very low on my to-do list for a long time. In fact, after having gotten over the novelty and past the need to process raw wool a few years ago, I decided I did not want to acquire any additional fleeces and would only spin fiber that had been prepared by someone else. I have rarely worked with anything other than commercially prepared fiber since then. 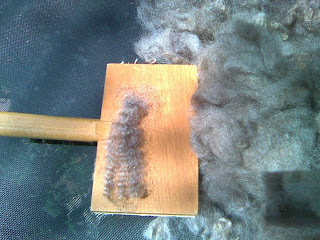 You can imagine how surprised I was to find this fleece while searching for some missing hardware. When I saw the bag in the storage bin, I knew it contained wool, but I never dreamed it was the beautiful Romney fleece. I laid it out on the trampoline and found that it was in incredibly good condition, especially after nine years of intermittent care. I've begun to pick it apart and hope to get it spun up over the coming weeks. 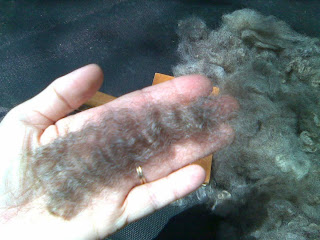 I have also discovered that the trampoline makes an excellent space for working with fleeces. Hmm, does that mean that new fleeces are in my future?

I don't think so.