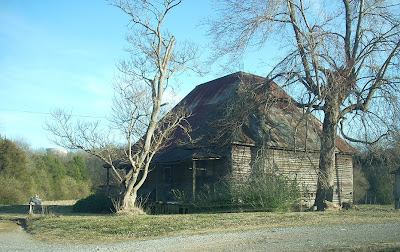 We passed this interesting old house on the road to the Bellefonte Nuclear plant near Stevenson, Alabama. You can see the tops of the Bellefonte cooling towers in the background. Click on the photo for a better view of the towers. 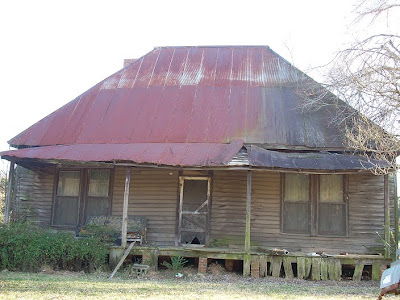 This house reminds me somewhat of the house in McEwen, Tennessee that my father lived in during part of his childhood. The family had moved to Humphreys County from Benton County around 1915 when my father was about nine years old. I do not know if the house was already built on the property when my grandparents bought it. Although there was a small amount of acreage for farming (five acres), my grandfather supported his wife and eight children as a railroad telegraph operator and later station master at the depot in McEwen. I have dim memories of my grandmother talking about milking, churning butter, tending chickens, and being engaged in various activities related to vegetable gardening, so there must have been enough farming going on to provide at least some of the family's food.

The truncated pyramid shape of the roof is similar to that of my grandparents' house, but their roof was higher and the chimney came right out of the center of the roof where the point of the pyramid would have been. The house had a functional second story that provided sleeping space, but I was never allowed to go upstairs. Unlike this one, their house was elevated a good four feet off the ground in front and even higher in back because of the slope of the ground. It had a veranda that ran along the front and the east side. The well that supplied the family with water was located right outside the kitchen door in an enclosed back porch. Because of this and the door on the west side of the kitchen that opened to nowhere but a drop of about five or six feet to the ground and offered a view of the outhouse a number of yards down the back side of the hill, I have often wondered about stages of construction of the house. Unfortunately, by the time I had questions to ask about the house, there was no one left to answer them.

My grandfather died in 1958. My grandmother continued to live in the house until the mid-1970's when she could no longer take care of herself and had to be moved to a nursing home where she died in 1976. The house was sold in the 1980's and the new owner razed the structure. I have no photographs of the old house. Maybe that's why I liked this one.
Posted by bunnits at 9:00 PM