Off to the Cape

I dropped my husband off at the airport this morning for his week at Cape Canaveral. It doesn't look like Ike is going to be much of a threat to the Cape. The biggest problem for that area will be if they have to evacuate the Miami area and everyone heads north. In the meantime, here's another Ike graphic from NOAA (http://www.noaa.gov/). I'm sure that you are all getting plenty of information on Ike from the weather reports.

Here is a recent photo from NOAA of Ike raging over Cuba. It's really hitting hard down there. Let's hope that it doesn't gain strength when it hits the warm waters of the Gulf. 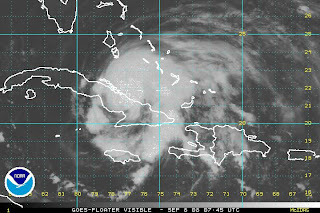 A friend of ours was stranded in Haiti during
Hurricane Gustav's rampage. He'd gone down on August 19th with a group from our church to do some work at our mission there and to attend the ceremony in which one of the brothers took his final vows at the monastery. Everyone made preparations to ride out the storm. They had 40 inches of rain over a 24 hour period. Winds reached 70 miles per hour. Flights were cancelled. After considerable delay, our friend arrived at the airport on Thursday, Aug. 28th along with 750 other people trying to get home. We were glad to have him back safe and sound.
Posted by bunnits at 8:00 AM