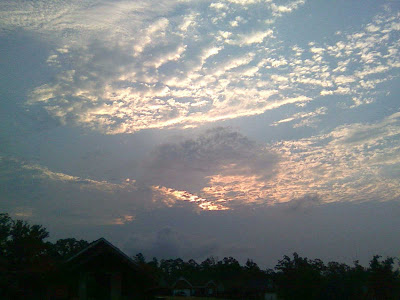 This morning I had an opportunity to see some iridescent clouds on the way to Gunter's Landing near Guntersville at about 6:30. I had watched the sky as the sun was rising, but I was driving and really had to be careful. I was treated to some really good color just before turning into the Gunter's Landing drive, but could not make photos. I stopped as soon as I could, but the color was less intense and, as usual, I only had my phone to make the pictures. The iridescent area is in the lower center of the photo, below and just above the darker, thinner gray cloud that was at a lower altitude. The colors ran the visible light spectrum, with each cloud exhibiting a rainbow effect, but by the time I could make the photo, I knew my little camera probably would not be able to pick them up. Clicking on the photo might give a better look at the colors.

Iridescent clouds are similar to nacreous clouds, but not as intense. Check out the Atmospheric Optics website for more information on all sorts of neat things and great photos.
Posted by bunnits at 9:32 AM