The photo with the Einstein quote that I've added under the header of the blog shows an example of an optical phenomenon in the atmosphere known as a parhelion, commonly known as a sundog.


Lately I've been on a quest for sundogs. Until recently I never realized that they are a common occurrence. I've seen them numerous times in the past, but now I'm on the lookout for them almost daily. My quest began when we spotted one the afternoon we went to the Christmas tree farm to get our tree. The one we saw looked a bit like the one in the photo just below. Someone asked how they formed and I said it was the result of sunlight reflecting off of ice crystals in the upper atmosphere. I went home and did an internet search and found out all sorts of interesting things about atmospheric optics. An added bonus was all the beautiful photos accompanying the information I found. 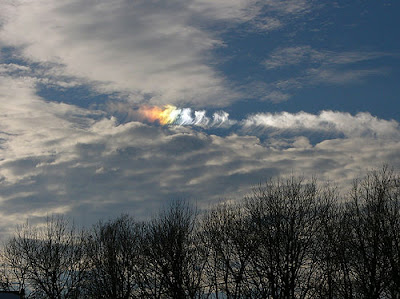 Sundogs (parhelia) look like rainbows that get confused and form out to the sides of the sun instead of opposite it, but they aren't rainbows at all. They form when sunlight passes through plate-shaped hexagonal ice crystals in high cirrus clouds. I found these photos on Flickr. Thanks to everyone for their beautiful photos (lucycat, matthetube, and donsutherland1, and to anyone else I might have omitted through oversight). For more information and lots of photos, check out Atmospheric Optics www.atopics.co.uk 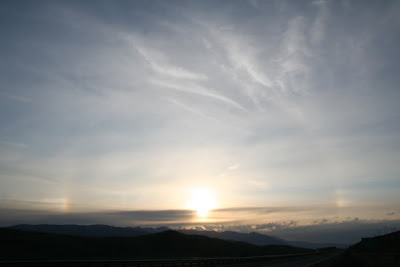 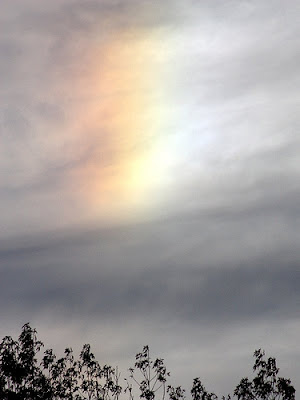 If you decide to go sundog spotting, be sure not to look directly into the sun. Block the sun with your hand or an object such as a chimney, light post, water tower, or the edge of a building. Here is an example of an easy way to block the sun. 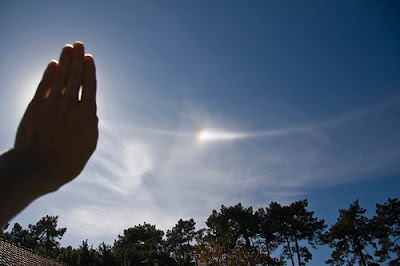 I've spotted about six in as many weeks since beginning my quest. My own efforts at photographing them has not been successful. Maybe someone in the family will give me a better camera for Mother's Day or my birthday (hint, hint). Here are two of my attempts to use the camera on my cell phone to photograph a sundog at sunset. As you can see, it did not work; I just got some not-so-great sunset photos. I tried photo editing to bring out the sundog, but that didn't work either. [BTW--there really was a sundog.] A few days after this sighting, we saw a sun pillar (check out Atmospheric Optics for info) on the way to Guntersville. It was only a little earlier in the day with sun a bit higher in the sky. I didn't even try to photograph it. 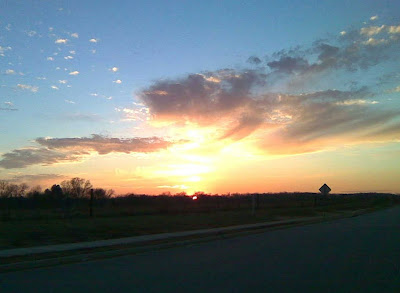 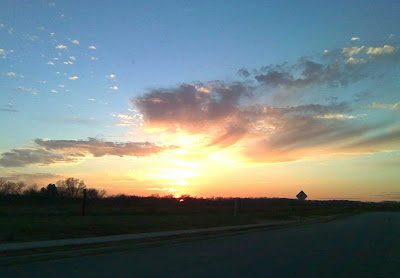