Our power came back on around 1:30 a.m. on Monday. At that time, about 30% of the residents of Huntsville had power restored. They expected to have another 25% by Tuesday. At the moment, I do not know how much of the city has power, but there are still a few spots without it and the utility company is asking people to conserve both electricity and water.

We were so fortunate that we did not have any damage or injury from the the wave of storms that came through here. There was a terrible amount of destruction in some areas of the county, neighboring towns, and other parts of the state. The main impact for us was having no electricity for four days. Camping at home, basically. John set up the charcoal grill and the Coleman stove and other camp gear into a neat little kitchen on the patio. Those years of working with scouting and living history came in handy. We had volleyball and badminton games on the front lawn. Our oldest son is rather dependent on electronics for his entertainment and was frequently found in one of our cars using the inverter to charge up his computer battery in order to watch DVD's. One day he got careless and forgot the time, running down the battery in his dad's car. My van had little gas for a couple of days, so we were trying to be very conservative with fuel consumption. Having to run the car engines in order to charge batteries was not something we cared to do. He needs to find something that doesn't require electricity to keep him occupied. Of course, we had a battery powered radio, but it was nice to turn it off at night and just enjoy the silence. Flashlights and lanterns made reading and spinning my main activities, so not much changed for me. John and my daughter's friend laughed about how I just spent the evening spinning by candle or lantern light, much like when I was at the living history museum on dark winter days with just candles and the fireplace. 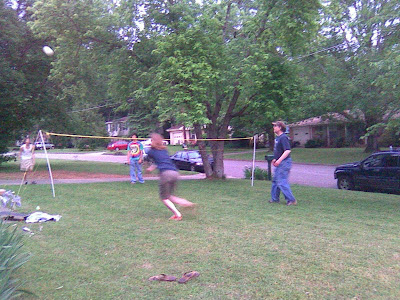 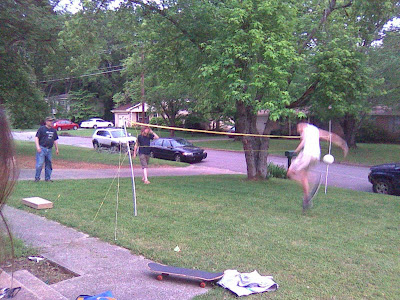 So many people have suffered so much because of the storms, I feel reluctant to admit that there were aspects of the power outage that I enjoyed--the dark, quiet nights and beautiful stars, the natural night sounds of little musical night critters. Birdsong during the day seemed so much more prominent and varied, too. There was a peacefulness that we don't often experience these days. In addition to the lack of electronic noise, there was little traffic noise because of the dusk to dawn curfew that has been in place since Wednesday evening. And most of all, neighbors coming together to help one another and share company. It took John and me back to the years when we were growing up in our small hometown in Tennessee. Nights were quieter and darker. Folks visited back and forth across their yards. Some of my fondest memories of those times are the evenings when my parents and the couple on the other side of the hedge gathered to sit on our front porch or under the neighbors' huge weeping willow tree. I would lie on the glider with my head in one of the adults' laps and be lulled by the quiet conversation and the sound of insects and usually fall asleep. The group would usually break up when it was time for my father to leave for work. He was a dispatcher for the L&N Railroad and always worked the night shift, leaving our house around 10:00 p.m. I'd get to wave to him as he pulled out of the driveway and passed the house, headed down the highway to his destination at Bruceton, some 40 miles away.

John's experiences were similar, but a bit different, having grown up on a farm about a mile out of town. The neighbors were a bit farther away, so less prolonged nightly visiting, but he had the dark sky, the sound of the night insects, the livestock, the creek gurgling, and the extended family gathering in the evenings before bedtime, and the lack of so much electronic sound that we have in today's life.

All the families and businesses that have suffered due to the storms have been in our thoughts and prayers and we have been truly thankful that we came through unscathed. Despite our years in scouting, we don't camp much these days, too many critters to take care of at the Huntsville bunstead. This was an opportunity to slow down, enjoy each other, enjoy nature, and be thankful.
Posted by bunnits at 11:29 AM