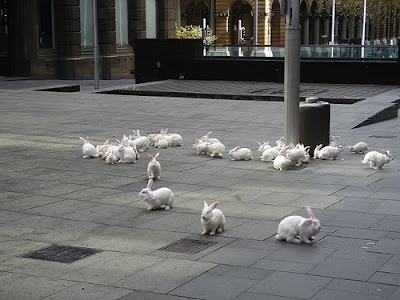 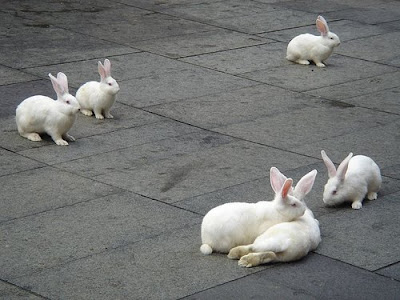 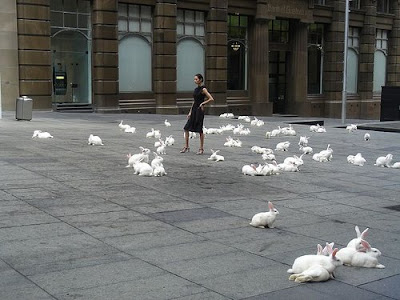 I found these photos a few years ago while doing a search for rabbit pictures. These were from a fashion shoot using rabbits as props. At first you get the impression that this had to have been a case of photoshopping, but there was a whole series of photos showing the process of getting the rabbits and the model just where the photographer and associated personnel wanted for the desired effects for the shoot. I was delighted to see so many bunnies in one place, but I'd hate to have been the rabbit wrangler. I lost the documentation on these photos, so I'm unable to give proper credit at present. I'd like to find it because I'd like to view the behind-the-scenes photos again. If I track it down, I'll post it later. In the meantime, enjoy the bunnies.

These pictures remind me of a dream I had shortly after we got our first two rabbits back in 2001. I went to feed the buns and as I opened the cage door, the two rascals escaped--along with innumerable other bunnies! It was like those clown cars in the circus where so many clowns just keep coming out of the tiny car. In desperation, I watched as rabbits hopped all over the place and I wondered how I was ever going to catch them. I got the bright idea to get large butterfly nets and swoop them up. I guess it worked--I woke up before I saw the end results. The last thing I remember was having all the family members help me frantically chase rabbits all over the house and yard with long-handled butterfly nets.
Posted by bunnits at 11:53 AM