The spring weather has brought out the grasses, violets, and bunnies. They really enjoy their time outside in the bunny pens. I thought it was about time I posted photos of all the rabbits, so here they are. These photos were taken during some of their outings. I have found that I am not very successful at photographing them with a digital camera and get lots of blurred photos, so I apologize for the fuzzies. 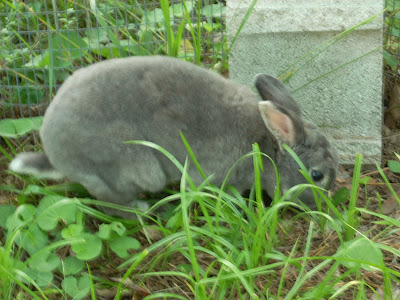 Here is Periwinkle, a Mini Rex rabbit. He is busy digging. I got Periwinkle a few months after buying our daughter and son their bunnies in 2001. I had put them off acquiring rabbits for years, but was so taken with the critters after we got the first two, that I wanted one of my own. I used to respond to the kids' request for a pet rabbit by saying, "No, they don't do anything buy lie around in their cages and eat and poop." Boy, was I wrong. Periwinkle is really a sweetheart. I would recommend the Mini Rex breed to anyone looking for a bunny to love. They have luscious, velvety coats and sweet, gentle personalities. 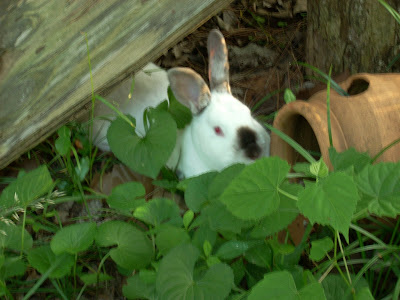 My Californian, Matilda, thinks she's hidden. Matilda, age 6, is buddies with Gabby. They are not what I would call bonded, but they enjoy each other's company and live in adjacent cages. I tried letting them share the same cage, but they apparently need their own space, so they got put back in their own houses. They share play space inside. Outside, they share the same play pen and get along well most of the time. Matilda is a big bunny, so it is entertaining to watch her and little "Petite" Gabby hopping about and playing. I found Matilda as a baby at a farm supply store a few weeks after Easter. She was in a cage with four litter mates who had been reduced in price to $5 each. Oh, dear. I played with all of them for a little while, contemplating "rescuing" all of them because I knew what fate could be in store for them. I chose Matilda because she seemed to be the least sociable, thinking that someone might not be willing to work with her. I am glad I brought her home. She was quite a biter during adolescence and would have possibly come to a bad end. 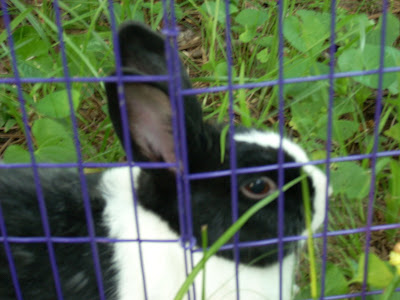 Mopsy, our Dutch bunny, is just taking it all in. Mopsy and her sister, Flopsy, were barnyard bunnies at our local living history museum. I had agreed to donate rabbits for the new project, provided they were given proper care. The rabbits were my pet project, even though I was not a barnyard employee. I watched out for them and monitored their care as much as possible. I said that if I ever thought they were not being properly cared for, I would quit and take them with me. They spent lots of good times teaching school kids about rabbits and animal care. Flopsy crossed over the Rainbow Bridge after about three years because she developed an abdominal abscess. The vet tried his best to save her, but was not successful. He eventually gave the museum a replacement bun, Pinto Bean (named for her white coat with tan, bean-shaped spots), so Mopsy didn't have to do all the work. In 2007, we lost Pinto Bean when a new, well-meaning but untrained employee let her get too hot one sweltering summer day. She brought Pinto to me saying that she just didn't know what was wrong with the rabbit. I knew instantly it was heat stroke and took action to try to save her, but it was too late. We had been extremely busy at the museum that day and I had been caught up in doing spinning demonstrations and other interpretive work. I'd had no opportunity to get over to the barnyard area to check on the rabbits since first arriving at work that day. I sorely regret that I could not have done something to prevent her from becoming overheated. Keeping my word, I "retired" from my work in living history right after that and Mopsy, now 7, came to live with me. I think she is happy in her retirement, too. [They no longer keep rabbits at the barnyard.] 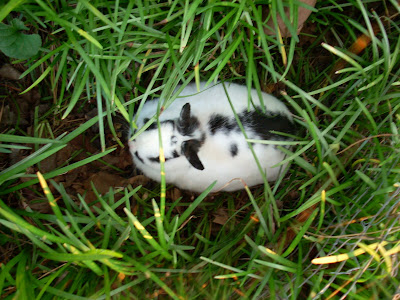 This is LillieBun, our Netherlands Dwarf mix, doing her Easter egg impression. She is one of our oldest bunnies, at age 8, and came to live with us about a week after we got our very first rabbit, Bunley, in 2001 for our daughter. Sadly, we lost Bunley to bladder stones a few years ago. Lillie is very spunky and a delight to watch. She is famous for having started the great racing event, the Indoor Bunny 500, in our long hallway. I believe she holds the record for wins. She and Bobbin share outdoor space. They both like the tall grasses. When Lillie stands up, her head just barely clears the top of the grass. It makes me think of that line from one of the Jurassic Park movies (# 2, I think), where the folks were trying to run for shelter and someone said "Stay out of the tall grass!" Yep, there's a LillieRaptor lurking there. 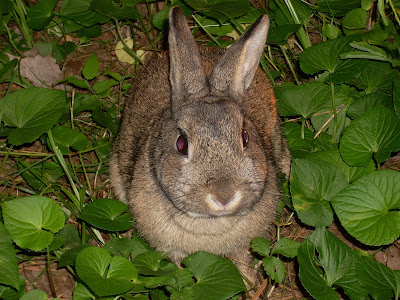 Gabby, Miss Britannia Petite, lives up to the the breed trait: "pretty, but aren't they mean little rabbits." Gabby is four years old and can hold her own in any situation. She is very assertive, to say the least. She gets on well with Matilda, but doesn't much like it when she thinks anyone is getting too far into her personal space. I think she and Matilda get along well together because Matilda is big enough and just cranky enough to put Gabby in her place now and then. They are actually quite the pair and seem to enjoy each other's company--just not all the time. We named her Gabby because of her habit of grumping and grouching so much as an adolescent. Just an aside here: spaying or neutering will often do wonders for a grumpy bunny. 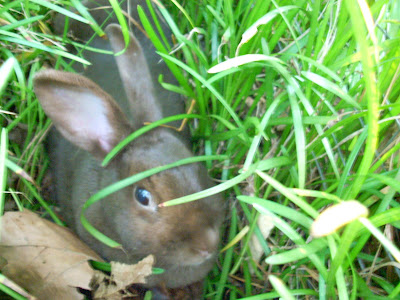 Bobbin, our "chocolate bunny"--we don't know what she is--a big, sweet, lovely, chocolate brown bunny, loves to hide in the tall grasses in the play pen she shares with LillieBun. Bobbin is six years old now. We thought she was a Havana, but she grew. The pet shop person on duty did not know anything about rabbits and did not have any information on her. We tried to track down information, but had no success. She was the tiniest of bunnies when we got her. Too tiny, I thought, to be away from mom. I guess you can say I rescued her because she was so tiny. I hated the thought of someone buying "that cute little baby bunny" and taking it home to some child who would mistreat it. She started out to live with our daughter's best friend, but there were allergy problems within a few hours, so Bobs has lived with us since day one. Her name came from the habit she had of bobbing her head up and down as a baby bun.


I do believe that rabbits were put here to give us happiness and cheer us. I think I have written about this before: they have great hind feet and little front feet; large ears and hardly any tail; their noses never stop wiggling and they are comical when they chew; they run and play seemingly for the sheer joy of it. It gives me great pleasure just to watch them as they go about their antics. When I am feeling down, I always go spend some time with them and am rewarded with nudges, licks, and gentle companionship. Just stroking their soft coats and elegant ears is soothing to a bedraggled soul.

Rabbits make wonderful pets. However, please do not get one if you are not willing to spend the time it takes to care for and love them. And do not get them for children under the age of 10 or for a child who thinks pets are toys. They need TLC and understanding. They are very much individuals with their own personalities. You cannot bend them to your will. They can be extremely loving pets, but if abused and mistreated can withdraw or become aggressive. Be responsible and spay or neuter your bunny. It will prevent unwanted litters and help to curb nasty temperaments. Read as much as you can about rabbits before you get one, so you will know what to expect. They are the third most popular pet these days after cats and dogs, but are not like either of those, so don't expect a dog in rabbit's clothing. By nature they are very social and love interacting with their humans when treated kindly. If you want to get a rabbit for a pet, please be willing to give it your time and love. If possible, check out your local animal shelter or see if there is a local rabbit rescue organization. Rabbits are turned over to shelters or left abandoned with great frequency by people don't take the time to find a better alternative for a bunny they realize they cannot keep. Be patient and kind with them starting out and you will be rewarded with the gift of a loving friend and companion for many years.
Posted by bunnits at 8:07 AM