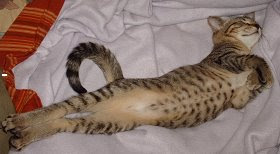 Meet Pascal. He is a year-old brown tabby who belongs to my daughter. He is absolutely the sweetest cat we have ever had. This photo was made shortly after he had come to live at our house. Our daughter had been living in an apartment for the summer before starting her second year at a local university. One of her neighbors' cats had kittens. He was apparently given away, but was returned to the mom's owners. My daughter lived across the hall and decided to take him. He was still a small kitten, although he doesn't look small in the photo the way he has stretched himself out. He seemed so tiny when he came to our house when she moved out of the apartment and came back home just before getting settled in the dorm.

He was about 8 weeks old and weighed three and a half pounds when he came to our house. The only thing big about him was his paws. They were huge. He was not a small kitten for very long, though. It seems he had just gotten accustomed to the other cats, gained some confidence, and was settling in well when he just sort of began to grow and grow and grow. He grew into those big ol' paws of his. He is huge. But he is a sweetie. He loves to sleep in these silly positions, usually belly up. A friend told me that when cats sleep that way they feel comfortable and secure. If that's true, he must certainly feel that way because that's one of his favorite sleep positions. He looks so peaceful. If only I could be so relaxed. 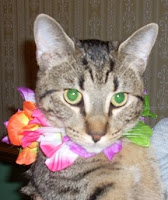