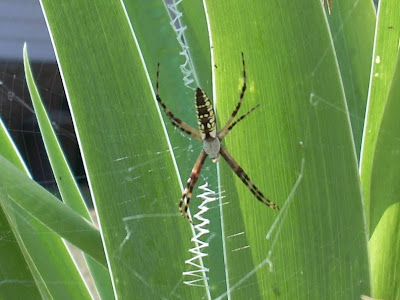 This lovely Argiope aurantia (Black and Yellow Garden Spider) has taken up residence in the irises. This photo shows her just slightly larger than the actual size she is at this time. When I first spied her, there were two females and two males, all rather small. One pair disappeared after a couple of weeks, leaving this one and her mate. He has since disappeared due to unknown causes. These spiders are often preyed upon by a variety of wasps, flies, and birds. The other three may have ended up as dinner or may have moved due to web disturbances because my husband and son were cutting tree limbs July 5th and kept dragging the branches against the edge of the iris bed as they carried them down to the the street for trash pickup. I was afraid that might mean the end of the argiopes, so I asked them to try not to drag the branches through the irises, not to mention the fact that it wasn't doing the plants much good. I was happy to find all four of them still in the iris bed once all the tree trimming was done. However, lately I've only seen this lady. I could not find her for a day or two, then this morning my oldest son asked me to "move this thing so that it won't be in my face when I go out the door. She had moved her web from the irises at the end of the front porch to the upper corner of the front door facing. I got the broom and gently relocated her to the iris bed. I don't know if she will stay there.


The argiope are orb-web weaving spiders that are known for creating zig zag patterns in the centers of their webs. The pattern (stabilimentum) may serve to attract prey or to camouflage the spider. One of their common names is "writing spider" because the stabilimenta look like writing. The spider eats the web each night and builds a new one every morning, taking up to four hours to make a new one. The photo above does not show the web construction very well. It was difficult to get good photos due to the slight breeze.

This photo shows the lovely lady as she begins the construction of a new web for the day. 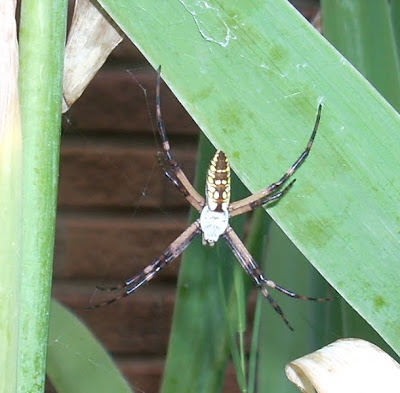 These spiders get quite large, but I have not seen any Argiope aurantia that were a great deal larger than the size of this enlargement (larger than her current actual size). These Black and Yellow Garden Spiders are also sometimes called banana spiders, but are a different species from the Banana Spider (Nephila clavipes, also known as the Golden Silk Spider) found in Florida and other southern coastal areas, which are the largest non-tarantula spiders in North America. Both of these species are non-aggressive. The bite is not harmful to humans and is reportedly less severe than a bee sting (although I have never found bee stings to be much fun). The name "Banana Spider" is also applied to the highly venomous Brazilian Wandering Spider (Phoneutria spp.) whose bite is harmful to humans.

When I was trimming up the unruly holly bush at the other end of the porch last week, I spotted another argiope. This was during the time that the others were in the iris bed at the other side of the house. I was pleased to find the spiders in two locations. They are great insect pest consumers. I have not seen this one since I disturbed her while I was working on the holly. At the time, she retreated further into the foliage. I hope she's still there. 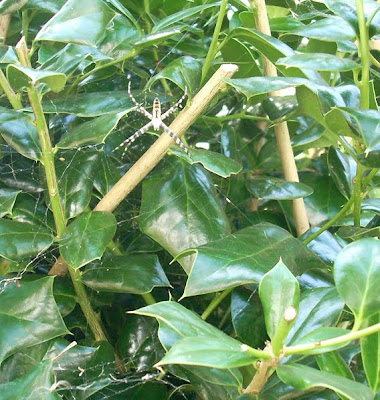