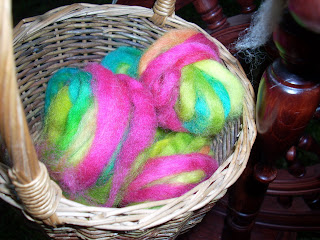 Tour de Fleece is a group of spinners who have joined together to challenge themselves to work on their fiber stashes and challenge themselves a bit with something a little outside their spinning comfort zones during the Tour de France. Members of the group try to spin every day of the bicycle race and watch a little of le Tour--hopefully while spinning. It is a great way to keep up with the race and reduce the amount of unspun fiber that we spinners manage to somehow mysteriously accumulate during the course of our spinning endeavors. 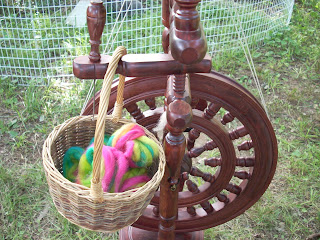 I decided to try to finish as many of my unfinished spinning projects as possible during the days of le Tour. I know that I will not get them all finished (like that beautiful light fawn alpaca fleece that I have just waiting for me to get my hands into), but if I get even two or three of them completed, I will be very happy. I am not sure what I am going to do for my big challenge on July 23, the last hard mountain climbing day of the tour. One of my spinning friends, Phyllis (www.spinknitandlife.blogspot.com), has decided to spin cotton on her charkha for Challenge Day. I am pretty comfortable spinning cotton, having spun it on both my charkha and the great wheel, so I don't know what I might choose to do. Well, I still have a few days to come up with something. 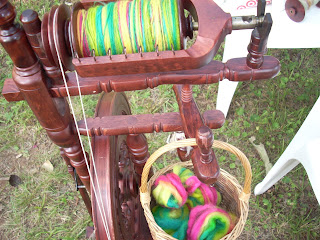 Here is one of my projects that is actually getting spun up. It started out as two 4-ounce bundles of Three Rivers Blue-faced Leicester handpainted roving that I got at a Lynne Vogel "color in spinning" workshop that I participated in at one of my favorite shops. The photos do not do the colors justice. The colorway is named "Tropical Bird" and reminds me of the beautiful colors of the rainbow lorikeet. I have a friend who has an Amazon parrot. I cannot honestly remember whether Maggie is a yellow-fronted or a double yellow head, but the colors of the yarn and the parrot inspired me to spin up something for Maggie's owner, Rosanne, my dear friend of about thirty years now. 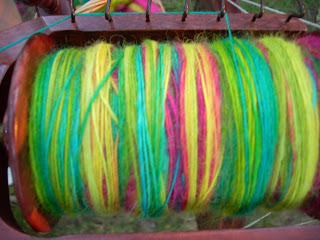 Rosanne and I have known each other since I transferred into the undergraduate program in Memphis in 1977. She was in the early stages of the graduate program at the time. She was living in Memphis and working at the university library as a reference librarian while working on her Master's degree. My family moved to Alabama in 1987 and she eventually relocated to her hometown in Georgia, so we do not get to see each other very often, but thank goodness for the internet. I'll have to get her to email me a photo of Maggie to post here.

Rosanne liked the samples of yarn and knitted swatches that I sent. She told me that her mother was standing nearby when she opened the envelope of yarn and unspun fiber and that her mom's comment upon seeing the colorful stuff was, "It's Maggie!" That's exactly what I thought when I saw the roving lying on the table at the workshop. I passed up all the tempting blue-green-purple varieties of roving that I am usually drawn to and chose to spin Tropical Bird in honor of Rosanne and Maggie. Once I get it all spun and plied, it will go to Rosanne for her to knit a wall hanging in which she will incorporate Maggie's feathers, pearl buttons, and maybe other interesting stuff.

Here is the first bobbin of singles wound into a ball. I am about two-thirds of the way through spinning the singles. It is tempting to go on and ply this ball 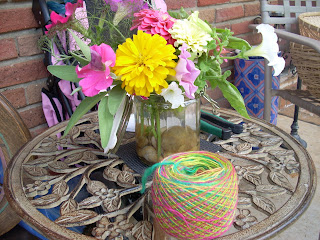 to see what the finished yarn will look like. I'll try to get some photos made of the knitted swatches with Maggie feathers that Rosanne sent back. 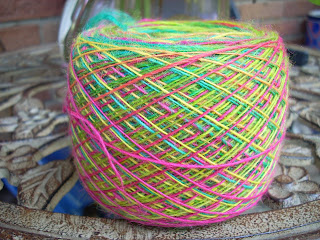