Well, we've shaken up some butter in our Mason jar. Now it has to be removed from the jar and worked to remove all the buttermilk that remains in the glob of butter. This is usually done by working the butter in a bowl with a pair of butter paddles similar to the ones below. 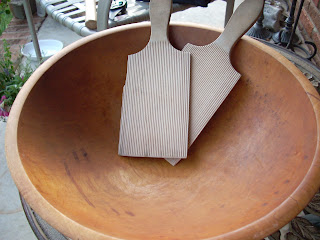 As you work the butter by turning it and gently squashing it, the milk that remains in the butter is gradually removed. It is important to remove as much of the milk as possible because it improves the texture of the butter and makes it keep longer. The milk will spoil before the butter gets rancid (remember it is just fat). Usually, the butter is eaten far too quickly to worry about it going bad. However, if you aren't much of a butter eater, it will keep for about two weeks in the refrigerator. The buttermilk can be saved for cooking, drinking, or feeding to critters. I like to drink it. I was raised on buttermilk. Unfortunately, it was rarely the freshly made sweet cream butter like we are making here, which I only got when my aunt happened to churn up some butter, but it was the best stuff that you could get at the grocery store--usually cultured, salted buttermilk. Boy, is it good with some yummy old cornbread crumbled up in it. Eat it with a spoon for a tasty treat. 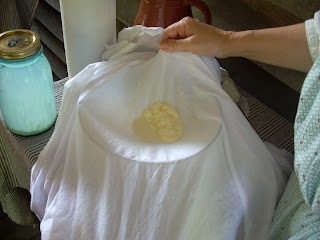 The day of our Dairy Day event, the temperature was too warm to allow working the butter in the usual manner. Trying to work it with the paddles only resulted in a gooey mess of butter stuck all over everything it came in contact with. I considered chilling it slightly to make it easier to work, but due to the time factor involved in the processing, it was not possible for us to chill the butter of each person who tried making butter--and believe me, there were more than a few! Instead, the butter was removed from the jar with a large spoon and put in a dish towel, repeatedly squeezed and du 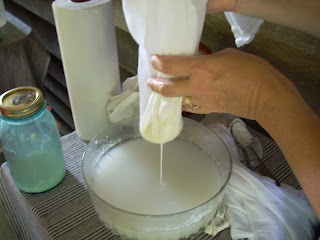 nked in cold water to rinse the buttermilk from the butter. This required frequent changes of water. I used a glass bowl so that the kids (and grown ups) could see the milk gradually rinsing out of the butter. Then, the maker had the option of trying the freshly made butter on some French bread or putting it in a baggie to admire on the trip home. 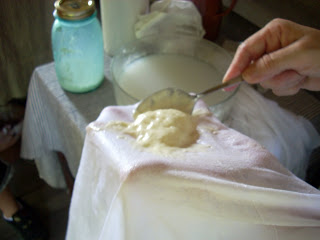 eat. Yum! Makes me hungry just looking at it. 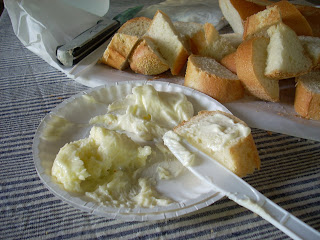 I'd like to thank all the great folks at the living history museum, both staff and volunteers, who helped me prepare for the Dairy Day butter making station, all the wonderful folks who visited us that day and tried their hands at making butter, and my son who was a great help in so many ways, especially in keeping the Mason jars washed and dried throughout the day. 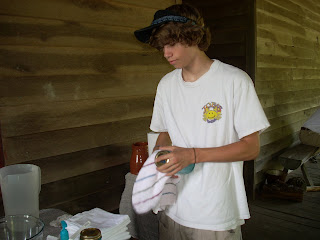