How Cool is This? 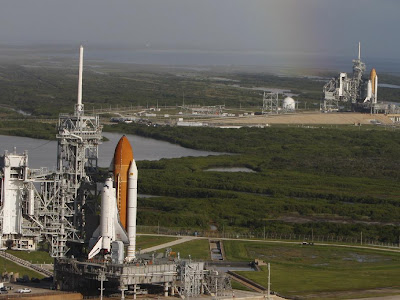 My inspiration for today's post (and it's about time!) is from the NASA Photo of the Day. Here are the space shuttles Atlantis on launch pad 39A (foreground) and Endeavour back there on 39B waiting for the October launch. This is the first time since July 2001 that two shuttles have been on launch pads at the same time. Endeavour is ready and waiting in case of the necessity of a rescue as the Atlantis STS-125 crew services the Hubble Space Telescope. Endeavour is also scheduled for a launch on Nov. 12, STS-126, to make a delivery to the International Space Station. Now, look closely at the photo and you can see a bit of a rainbow back there near Endeavour. I think that's really neat.


You might have figured out from my recent posts that I am a space program enthusiast. I know and understand--and even agree with a few--of the arguments as to why we should not spend so much money on space exploration, but I am also glad that we do. If you stop to consider all the things that space exploration has added to our lives--well, I probably wouldn't be sitting here at a home computer if not for the space program and there are lots of medical advances that we would either not have or would just now be trying to develop, not to mention little everyday conveniences that are too numerous and taken for granted to even begin to enumerate. We have really come a long way in technological development and its applications since the 1950's and much of it is a result of the space program.


Because of my husband's career, our family has had a few opportunities to go down to Cape Canaveral and watch some launches in person. It is really an experience and I would recommend that anyone try it at least once. The only problem is that you never know when there will be a postponement for whatever reason. Fortunately, we haven't had that happen when we've been down there. Of course, the space shuttle launches are not the only ones you can view. One time when the kids and I were there visiting while Dad was working, we got to see the launch of a Delta rocket. It was pretty impressive, even from the balcony of the condo. There are off site areas for launch viewing that are open to the public and you can check out the details on the NASA website (http://www.nasa.gov/centers/kennedy/about/view/view_shuttle.html ). Although security concerns have made it necessary for NASA to not allow on site viewing from personal vehicles at this time, tickets are available for viewing through tours at Kennedy Space Center (http://www.nasa.gov/centers/kennedy/about/view/index.html).


As impressive as the launches are, one of my favorite experiences was when I got 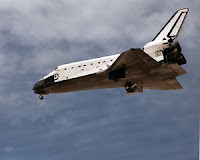 to see a shuttle approach for landing. I didn't actually get to see it land, but my husband watched from the roof of one of the buildings at Kennedy where he was working for a few weeks. The day of the landing, lots of us folks just went out onto the beach at the condo complex to watch. We were talking and chatting until the shuttle became visible. There were some shouts of, "There it is! There it is!" as it came in from the west, gliding in silently with no engine power, but th 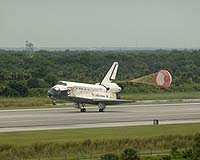 en we all became very quiet and there was very little talking as we all watched it get closer and lower in the sky. Suddenly, there were two loud pops, the sonic booms created as it passed overhead breaking the sound barrier. Then you could hear a sort of sizzling sound as it streaked past almost directly overhead, still fairly high, but low enough that the landing gear was visible, on its approach for the runway at Kennedy. We all just sort of stood silently in awe of what we'd seen. It was really neat and something I will not ever forget.

I have been excited about our space program ever since I was five years old--a long time ago, folks--not that long after the beginning of the U.S. space program. If you check out my earlier post of 5/13/08 about my sister being an only child, you'll know that she was married by the time I was about nine months old. I spent my summers with her and her husband from the time I was five until I was eighteen. I had some really wonderful summer vacations because of the various places that they lived as a result of my brother-in-law's work with NASA. Because of his work, I used to watch every launch that was on TV. I would be so excited! I always wished that one day I could be an astronaut and get to go into space with the likes of John Glenn and Alan Shepard. Back then, it seemed like something that a girl could only dream about doing. I can remember just after graduating from high school back in 1969, watching our first lunar landing on TV at my sister's house that night of 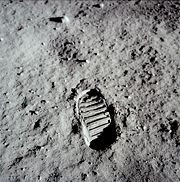 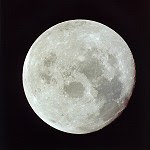 ortly after Neil Armstrong took that first step onto the moon, I just had to go outside and look up at the moon shining there in the sky that night, thinking about those brave men who were up there so far away. I can't tell you how many times I have wished that I had pursued that dream, but I have to add that I am not sorry that my life turned out the way

it has, even though sometimes I wonder about getting to the next day when things are really hectic and crazy.

All photos are from NASA files.
Posted by bunnits at 3:33 PM