Because of my work as an archaeologist in another life, I had originally hoped to visit two well-known Southwestern archaeological sites of the ancient Pueblo cultures, Chaco Canyon and Canyon de Chelly, while in New Mexico and Arizona. See a map of the area here. After reading the AAA tour guide and park descriptions of less than ideal road conditions near Chaco Canyon (some 20 miles of unimproved, rocky and rutted road) and the warning that GPS devices might not be functional in all areas, I decided against trying to drive the last few miles to Chaco in our van. We were afraid there might be similar road conditions leading to Canyon de Chelly and decided to save both those stops for another trip.  Maybe next year. Instead, we decided to visit archaeological ruins of the same types of ancient Southwestern cultures in the Flagstaff area.  (Some photos were made with the camera instead of the cell phone, so clicking might yield closer looks. Also, underlined links were supposed to be highlighted in red, but Blogger is uncooperative today.)

Just a few miles north of Sunset Crater Volcano near Flagstaff is Wupatki National Monument. Both sites are located about fifteen miles north of Flagstaff along a scenic loop that covers about 50 miles off US 89 beginning at Sunset Crater, then meanders along Route 395 back to 89 about 15 miles north of the Sunset Crater Visitor Center.  After our visit to Sunset Crater on our first day in Flagstaff, we decided to go back another day and spend some time at Wupatki. We did not try to cover the entire Wupatki site complex. A number of the 2500 documented sites of the complex are accessible by trails and we had a bit of a time trying to decide which to explore. We were trying to get to Sedona, AZ later in the day, so our ramblings took us to the Lomaki (Hopi for "Beautiful House") site where we walked among many abandoned structures of these ancient people. Daughter near one of the houses constructed of sandstone blocks. These blocks were held together with mortar and portions of many are still standing, even though the site was abandoned sometime around AD 1200. 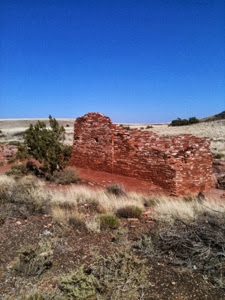 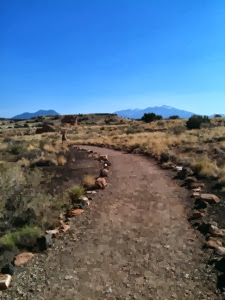 The trail at one of the stops at Wupatki with No. 2 Son and a structure in the distance. Sunset Crater is visible on the left and the San Francisco Peaks on the right 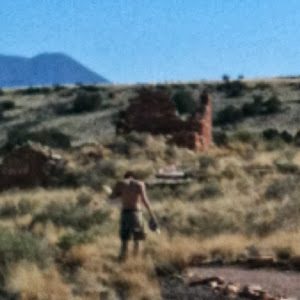 Close up of that trail shot--No. 2 looking at a lizard with the house just beyond


More photos of some of the ruins 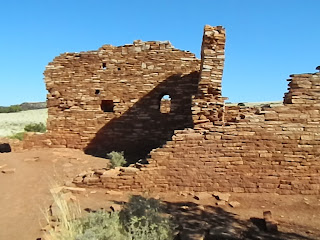