Perhaps of interest to the spinners out there-- 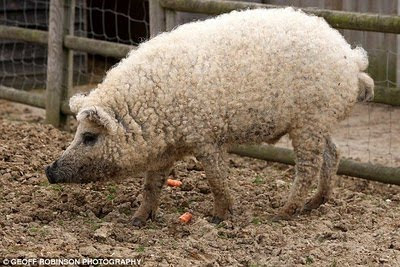 Mangalitsa, a rare breed of European pig that originated in Austria and Hungary. The name has several spelling variations. From Wikipedia, I found that the Serbian name is Mangalica and means "hog with a lot of lard." A zoo in the UK has recently imported three of them in an attempt to save them from extinction. A British variation of the "sheep pig" was once a common sight in Lincolnshire and was shorn once a year to make sweaters from the hair, but they became extinct in Britain in 1972 according to an article at Scribd.com http://http//www.scribd.com/doc/30350048/Mangalitza-Sheep-Pigs